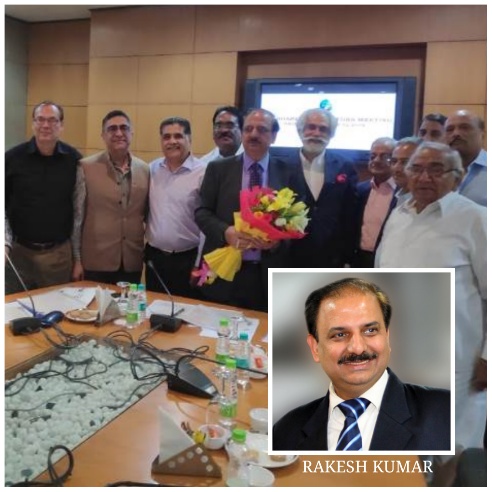 GN & New Delhi –  Mr. Rakesh Kumar has been unanimously re-elected as Chairman for third ConsecutiveTerm  by the 86th Board of Directors meeting of India Exposition Mart Limited (IEML).   The entire Board of IEML appreciated the milestones achieved by Mr. Rakesh Kumar during his previous tenure and further welcomed him for the third consecutive term.

Mr. Rakesh Kumar has served in various professional associations in the field of exhibitions & Convention Sector and also  handicrafts exports. He is also the Executive Director of the Export Promotion Council for Handicrafts (EPCH].  He has been the President of Indian Exhibition Industry Association [ IEIA] and is also on the Board of various National and International Associations.

IEML is India’s first state-of-the-art project for the cottage sector which provides round-the-clock marketing services. India Exposition Mart Ltd (IEML) has been established for improving the vast potential of export in the field of Indian handicrafts. India Exposition Mart Ltd (IEML) is also famous for its world class infrastructure which provides venue to organise various exhibitions and fairs.

During his past tenure of four years, Mr. Kumar had done lot of commendable work not only for IEML but for the Society of Gautam Budh Nagar, Uttar Pradesh. Through his vast vision, Mr. Kumar had commissioned 3MW solar rooftop project which is not only beneficial for IEML but as well for  the Society.  To expand and cater the needs of major Exhibition Organisations of the Asia and World, Six additional halls have been built and also hard standing of 140000 SQM have been built during his tenure only.    Beside above, IEML is also going to unveil the hotel project for the Exporters and Exhibitors of the IEML.

Mr. Kumar is known for his new ideas and innovative thoughts and by working on his own innovated ideas, he launched the India International Hospitality Show [IHE] and also various new shows in collaboration with other Organisation like Mega Trade Fair, Escalator and Elevator Expo etc. During his tenure only, IEML succeeded to host  IHGF-Delhi Fair duly declared as  world’s  largest handicrafts fair by Limca Book of World records and other biggest shows of Asia  like Auto Expo, ELECRAMA, GES, Re-Invest Submit, COP-7 etc.

His further took initiatives in the field of education where Academy of Convention Trade Fair Event Research & Management [ ACTERM]  has been launched as an education institute  of IEML where ACTERM is imparting special education to  those who are interested  in the field of MICE.

In the field Social Welfare, Mr. Kumar is working very hard for upliftment of education in Government schools at preliminary level through primary school and mobile education van and also providing sanitation facilities at School level for boys and girls.

This year Mr. Rakesh Kumar has been felicitated  with MICE Person of the year award by TRAVTOUR MICE and International Hospitality & Travel Award 2018.   During his tenure IEML has been honoured as Best MICE Venue.