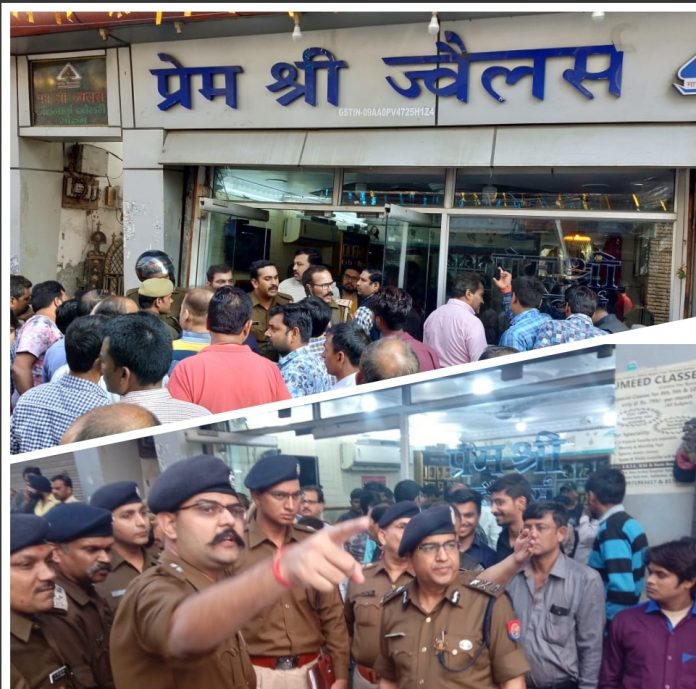 Ghaziabad : Five unidentified armed criminals robbed jewellery worth 2 crore from a jewellery shop in daylight in Sahibabbad area on Wednesday. To create the terror in locality the rubbers fired two rounds in air and successfully managed to flee after robbing gold, diamond and jewellery. The victim jeweller has claim robbery worth more than 2 crore.

The incident took place in the show room of jewellery in the name as Prem Shri Jewellers, located main market, Shyam Park, Sahibabad. Five youths about 20 to 25 year age group reached at showroom on two bikes with arms near about 1.10pm. Three of them had put on mask on their faces and two had helmets. One of criminal stood at gate with pistol and four entered the show room. Two criminals covered the owner Suraj and his employee Rahul at gun point and two looted all the jewellery, cash, diamonds etc and put them in the bags those they had carried with them. One criminal fired two rounds in air and showing the pistols they fled by their bikes.

Later the passengersby informed the police. Inspector General of Meerut Range Rajkumar, SSP Vaibhav Krishna, SP City Shlok Kumar and many other officials reached the spot and assured to nab the criminals shortly.