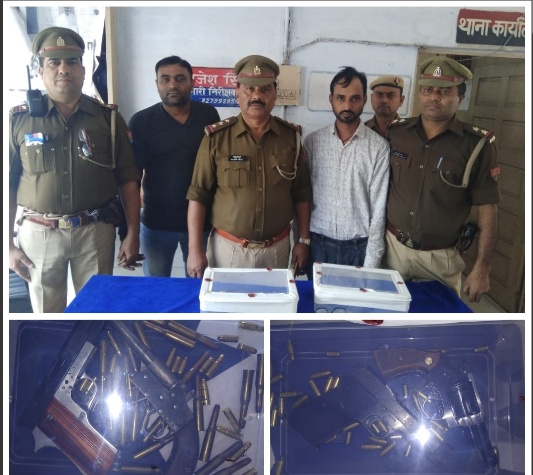 Ghaziabad: PS Station Kotwali succeeded in arresting 2 accused and seized 9 mm pistol and live bullets from their possession.
The district police has taken a big breakthrough, the police arrested two accused who supply illegal weapons in the districts.


In the press conference, Shalok Kumar  SP City Ghaziabad said that Kotwali police arrested  the two accused from Hapur Tiraha under  PS City Kotwali, Rajesh Kumar Inspector Crime had information about some people who are trying to sale illegal arms in Ghaziabad as per information Rajesh made a team of police personal and arrested 2 accused namely Kavindra alias Bittu and Lakhan and  seized illegal arms and live cartridges from their possession. Accused  both of whom are Meerut residents. There are many criminal cases registered against them and he is a history sheetar from Baghpat. Police recovered a 9 mm pistol, a 315 bore Country made pistol, A 32-bore revolver and  alive cartridges from them.