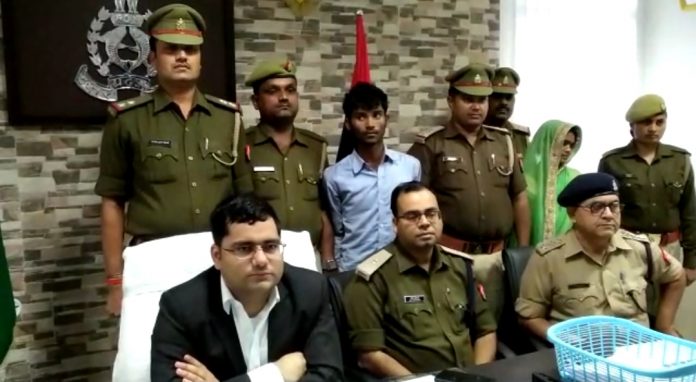 Sant Kabir Nagar: PS Dhanghata police solved the murder mistry of minor child who was found dead four days back in the city. The unidentified child age of around 06 years was found dead near the river under  police station Dhanghata.

On November 11, a six-year-old innocent dead child was found within the area of police station Dhanghata. To immediate arrest the accused, the police superintendent Akash Tomar constituted a team and said team reached to the accused and found that the mother and the uncle of the child were involved in the murder was arrested.

In the press conference, the Superintendent of Police , Sant Kabir Nagar Akash Tomar informed “The child’s mother Kavita had an illicit relationship with her broher-in-law Rakesh, which the child had came to know as he had seen them in a compromising position. The mother was afraid of it that the child might tell this thing to his father or anyone else. In order to concealing this secret Rakesh murdered the child by criminal conspiracy. Although he was changing his statements again and again made the police this brought police to be suspicious and when police tightened it pressure Rakesh accepted his crime and both the duo were arrested.” In order to solve the murder mistry the Superintendent of Police Akash Tomar had announced a reward of Rs 25000/- on the successful unveiling of the incident.