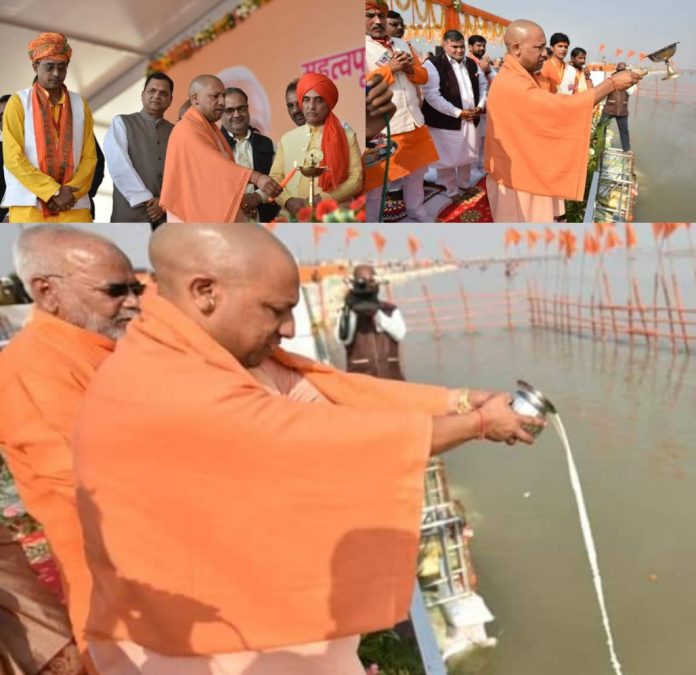 Uttar Pradesh’s Chief Minister Yogi Adityanath today participated in “Ganga snaan” on the ocassion of Kartik Purnima at Garhmukteshwar on the river bank of Ganga in Hapur and also announced many development projects here.

Infact UP CM was inaugurating some projects and said that after the commissioning of these projects this area will be developed and will be known as a new pilgrimage in the western UP. CM, who reached Garhmukteswar, on Thursday announced the launch of four projects at a cost of rupees twenty million.

The Chief Minister started projects to construct a shed for the guest house, amusement park, laser sound and light show and the rest house for the devotees. He expects this place to grow as a pilgrimage site soon.

The Chief Minister of the state had reached Ganga Mela on Thursday afternoon on the ocassion of Ganga Dashahra. After reaching the slot near holy river Ganga, the CM first performed prayer to Ganga and also conducted Ganga Aarti.
He also released a book on the development work of the district Hapur and inaugurated many development schemes in crores and laid down the foundation stones of these pronects.

Yogi said that the State Government and the Central Government are taking steps to develop this fair as a new pilgrimage. For this, we are working towards making the overall physical development of this area by making a concrete plan for this area which were never taken in past due to insensitive last governments.
Yogi said that the history of this fair is 5000 years old and this tradition is to be further strengthened. The Chief Minister also announced to build a bridge over the river Ganga and said that due to the formation of this bridge, the pilgrims who came here would be very comfortable during Ganga Pujan.

On the issue regarding sugar mills in this area, the Chief Minister said that we understand that in the new session, we will be in a position to start two new sugar mills where 119 mills are already running. He said that the state government has made arrangements of Rs 6,000 crore for the remaining compensation to be received by the sugarcane growers farmers and has given instructions to the administration to give compensation in every situation before November 30th.