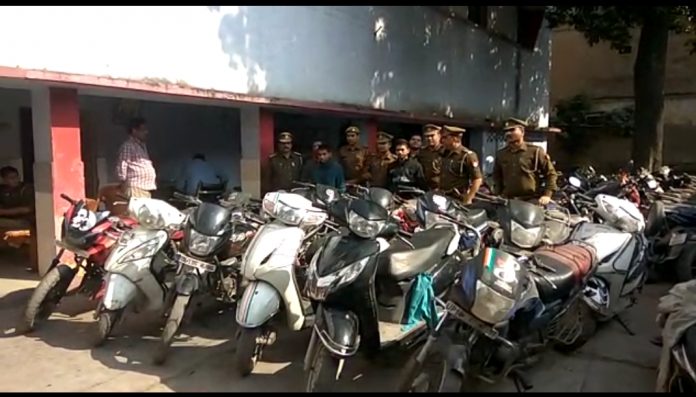 Ghaziabad: PS City Kotwali nabbed 3 accused who were stealing  motorcycles professionally in NCR. Police seized 13 bikes from their possession.
Ghanta Ghar City Kotwali Inspector Jai Karan was on routine checking at Bazaria cut with his police team meanwhile he saw a moving scooty on which 3 person were riding. police warn scooty rider to stop but rider quick turn the scooty and tried to running but police followed them and arrested them and asked reason of running in suspicious condition but they couldn’t describe. Arrested accuses identified as Aamir, Imran and Juber resident of Vijay Nagar.


According to Shlok Kumar SP City Ghaziabad, “Arrested all 3 accused were doing incident of bike stealing in professional way in NCR. There are 13 stole two wheels vehicles has been recovered in which 4 Scooty and 9 bikes.”
“They were stealing those vehicles which found in alone place and used to sale in open market in very cheap price” added Shlok Kumar