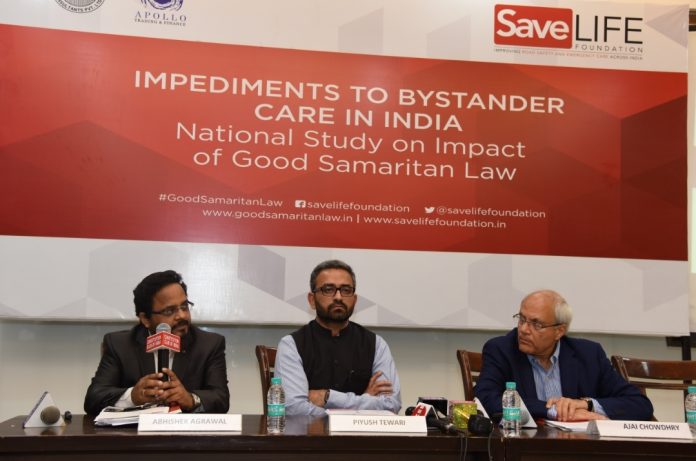 New Delhi : Findings of a national survey commissioned by the SaveLIFE Foundation have revealed that overall only 16% of respondents are aware about the Good Samaritan Law.

The survey also revealed that even though there has been an increase in the general willingness to help the victims, from 26 percent in 2013 to 88 per cent in 2018, yet in terms of concrete actions the willingness to help victims is still low. Out of the respondents willing to help, only 29 percent were willing to escort the victim to the hospital, 28 per cent were willing to call an ambulance and only 12 per cent said that they would call the Police.

Earlier this year, SaveLIFE Foundation commissioned a national level study to evaluate the impact of the Good Samaritan Law. SaveLIFE Foundation is credited with securing India’s very own Good Samaritan Law in 2016 through a PIL in Supreme Court of India.  The law was instituted in March 2016 when Hon’ble Supreme Court provided “force of law” to the Guidelines and SOPs issued by Ministry of Road Transport and Highways under Article 141 of the Constitution making it binding on all the States and Union Territories of India.

Commenting on the research report, Piyush Tewari, Founder and CEO, SaveLIFE Foundation said, “It is quite evident from the study that even two years after the institution of the Good Samaritan Law citizens are unaware of their new rights when they help an injured person on the road. Consequently, people are still hesitant to help. Moreover, implementation of the SC judgment even at the official level has been remarkably low, leading to lack of essential systems as mandated by the Honourable court. The need of the hour is for States to translate the SC judgment into a State Good Samaritan Law, which would aid the establishment of necessary systems including for public awareness, and ensure that lives that can be saved are not lost merely due to public fear of getting harassed upon helping someone.”

Narrating a personal account, Mr. Shashank Shekhar said, “Last year on 10th August my brother, Prem Pradeep was seriously injured in a road crash on his way to Noida from Lucknow. One of our acquaintance who was accompanying my brother requested passersby to stop and help, but unfortunately no one stopped. My brother was partially paralyzed for 3 months and is still undergoing treatment including speech and occupational therapy. The crash has taken a huge toll on our family. Perhaps speedy assistance would have ensured that he receives immediate medical care and things wouldn’t have turned out to be so grim for us.”