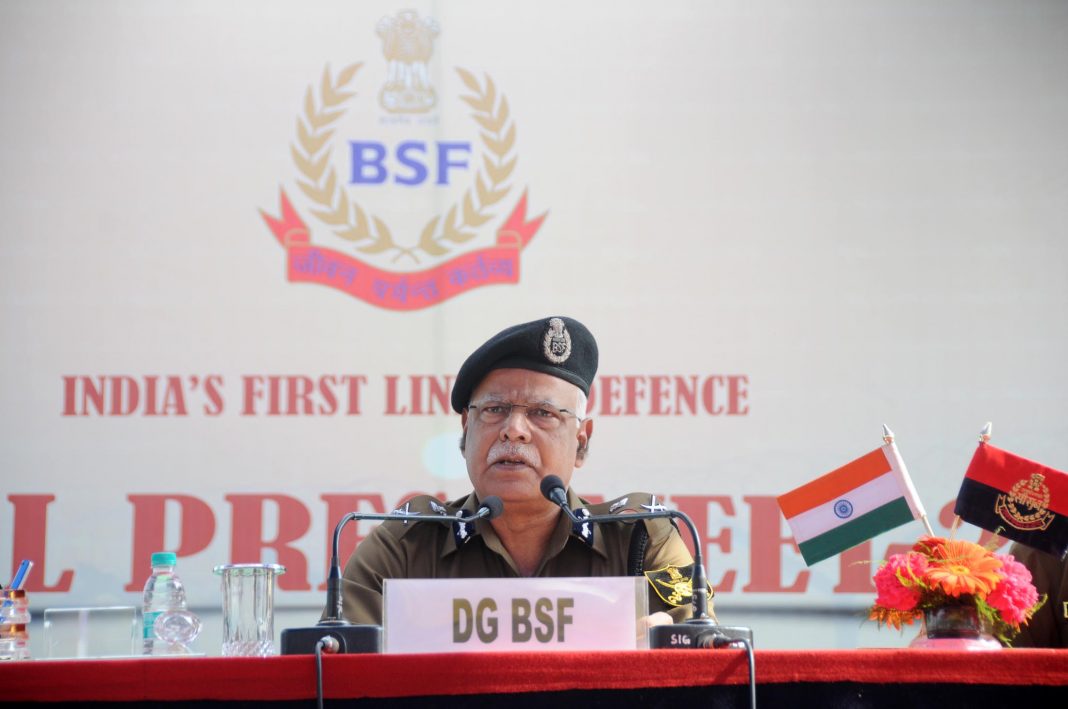 》From 25 battalions in 1965 to 192 battalions; deploying more than 2.6 lakh personnel.
》Safeguarding 6386 Kilometre International border along Pakistan and Bangladesh.
》 Also deployed at LoC in J & K, CI-Ops in Manipur, LWE infested area in Odisha & Chhattisgarh, IS Duties and peace keeping with United Nations in D R Congo.
》Recovered 30808 Kgs of Narcotics during this

The Border Security Force is completing 53 years of its dedicated, distinguished and glorious service to the Nation on 1st December 2018.

Since its inception, BSF has etched its history with unmatched sterling service to the nation be it Internal Security, Counter Insurgency or Anti Naxal Operations. The professional approach and capability of meticulous execution of assigned tasks bestowed the Force with the status of the “First Wall of Defence” by Hon’ble HM. We have defended our borders with courage and commitment, giving due respect to human rights and earning cooperation of border population. In this 53rd year of our formation, we re-dedicate our services to the Nation with a resolve to perform our duties with more vigour and valour and continue to live upto our motto

On this occasion, the Force remembers pays homage to 1879 brave hearts, who made supreme sacrifice on the altar of duty and attained martyrdom. The supreme sacrifice and valour of Bordermen has been duly recognized by the Government of India by awarding 1 Mahavir Chakra, 13 Veer Chakras, 4 Kirti Chakras, 13 Shaurya Chakras, 232 PPMsG and 921 PMsG. This is a matter of pride and honour for each one of us. This year BSF has been awarded following Medals on the occasion of Republic Day and Independence Day.

(b) Ops Bhim – Repulsion of undue aggressive posture by Pak forces on Jammu :- Infiltration, sniping and cross border firing has become a regular affair on the Jammu IB with a constant high alert being maintained in the region. Misadventure of Pakistan has always been given a befitting reply at the hands of the BSF under various Operations. Pak Rangers started unprovoked firing in the Samba sector in Jan’2018 and simultaneously attempted infiltration from another area. The BSF thwarted these attempts and killed the guide of the infiltrating party. Alive to this constant threat, the Jammu Frontier launched Operation Bhim-I in Jan’ 2018 and Bhim-II in June’ 2018 respectively, under which the Tactical Headquarters of all the battalions were established at the International Border and a comprehensive retaliation plan was worked out diligently.

BSF responded in a targeted and deliberate manner so that the Rangers were pinned down and confined to their posts. Unable to handle the BSF assault, the Rangers were forced to open the entire front and a heavy exchange of fire started on the entire IB. BSF surgically targeted Pakistan posts in retaliatory firing which resulted in heavy losses to Pak Rangers.

With Operation Bhim-I & II, BSF proved its worth to the nation and the border population once again.

The vigilant troops on the borders have held in check various trans-border crimes like cattle smuggling, FICN, Gold and silver smuggling and smuggling of narcotics. We are fully geared up and there is an increased vigil for Bangladesh elections scheduled at end of December. We have studies the local vulnerabilities and ground troops have been sensitized to the issue.

Declaration of Crime Free Zone :- On 9th March’ 2018, South Bengal Frontier of BSF opposite south west Region of Border Guard Bangladesh (BGB) declared first ‘Crime Free Zone’ in a stretch of 8.3 Kms on Indo-BD Border. This patch was vulnerable in terms of smuggling and other trans-border crimes. The stretch covers Gunarmath and Kalyani border (BOPs) in India and Putkhali and Daulatpur (BOPs) in Bangladesh across the border. After in-depth study of crime pattern and demography of the area, human and technical resources were reinforced and re-deployed strategically. Since, declaration of Crime Free Zone, no trans-border crime has occurred in this stretch. Work is under way to establish one such crime free zone in every Frontier of the Eastern Theatre.

(e) Left Wing Extremism theatre
Surrender/ Apprehension :- In LWE theatre BSF is organizing operations in meticulous and extensive manner confirming the ethos and spirit of local populace. This has profound effect on the masses who are moving away from the influence of Maoists. The meticulous implementation of surrender policy of the state and creation of environment through operations is leading to surrenders, thereby effecting successful counter propaganda and weakening of Maoists ranks. The data of arrest and surrender by BSF is as under;
S/No. Achievements Odisha Chhattisgarh Total
1. Neutralized 01 – 01
2. Apprehension 49 27 76
3. Surrender 38 02 40

Expansion of Area of Domination:- BSF has further identified the areas where LWE (Left Wing Extremism) movement has been frequent and free. These areas were safe havens for the LWE cadres. Now, BSF has penetrated into these areas after increasing domination with specialized operations. BSF has now established 10 new COBs and has started domination in cut-off areas.

(a) COMPREHENSIVE INTEGRATED BORDER MANAGEMENT SYSTEM (CIBMS)
Border Security Force has taken over the task of erecting physical barrier on entire international Border to make it impregnable for any kind of illegal infiltration. However, there are stretches which are difficult to be covered by physical fencing and hence, decision was taken to install Technological Solution on these gaps covering an area of about 2026 KMs on various places. The Technological Solution is called Comprehensive Integrated Border Management System (CIBMS) which is a combination of surveillance devices, Data Backbone, Communication Network and Command Control Centre.
The CIBMS multiplies human surveillance by sensors surveillance and ensure that any attempt of infiltration does not go without detection.
Two such Pilot Projects (Approx. 5.5 Kms) have been completed in the State of J&K. These Pilot Projects were inaugurated by Hon’ble Union Home Minister on 17th September 2018. The projects are under critical analysis and based on experience, similar projects at other locations shall be planned and executed. Meanwhile, one project covering a distance of 60 Km over mighty river Brahmaputra in Dhubri District of Assam is also being executed by BSF and is expected to complete by December 2018. BSF has become the first Border Guarding Force of the India to install CIBMS on the International Border.

(b) IP BASED DMR COMMUNICATION
Communication is the backbone of all operations on the Borders and elsewhere. In last few decades, the Comn system has been using Analog technology. A drawback of the Analog technology is that value addition in terms of integration and application is not feasible. Recently, BSF has initiated the process of digitalisation and further improvisation to make it an IP enabled system. This up-gradation of Communication system has opened flood gates for large scale integration and application deployed for making Comn system versatile and integrated with other technical systems used in operations. This up-gradation of Comn System is taking place at a time when CIBMS is being rolled out and it will prove very crucial in the modernization of entire set up operation in the Force.

(d) KYP and KYA :- Due to fast changing Socio-Economic fabrics in society, dynamics of border management, increasing Operational and Administrative commitments of the force and use of technology in field and social media etc has made the job of various level Commanders more challenging. To ensure effectiveness and maintain high standard of efficiency of the force, it is a must for every Commander to know their Area/AOR and Personnel well and take necessary measures time to time.

(i) “Know Your Personnel” (KYP):- KYP has been initiated down to BOP level with an aim to increase better inter personal relations between all level of Commanders and under command troops. It is imperative for commanders at all level to know their men for effective grievance redressal mechanism in the force. KYP has been launched as a tool to make it imperative for all leadership levels (right from guard/ section commander to Battalion Commandant and all other officers wherever posted, for those posted immediately under them) to know their personnel in detail. This tool attempts to know the personnel, their strength, weakness, interests, aspirations as well as their personal and professional problems by way of personal interactions.

(ii) “Know Your Area” (KYA) :- BSF has peace time and war time role on International Border. KYA has been initiated to undertake various operational and administrative measures with an aim to increase the professional knowledge of every BSF personnel of his area of deployment and thus enhance his professional capability. It is necessary for every border man to know the topography and demography of the area. Similarly, it is also necessary to know the crime pattern of the area, past crime history, details of criminals, bad hats, sympathizers of both law enforcing agencies and ANEs operating in the area of responsibility. Salient features of this initiative is structured documentation on topography, demography and crime pattern of the area. These acts on our part will cover WHAMP (Winning Hearts and Minds of People) operation.

(e) Air Courier Service :- BSF has made arrangements for conveyance of troops deployed in Jammu & Kashmir and North East Regions proceeding on leave/ Government duty by Air. All CAPFs personnel are entitled to avail this facility once in a year during leave.

(f) Railway facilities :- BSF has also made arrangements for attachment of dedicated AC-III tier coaches in four major trains i.e. Awadh Assam Express, Kolkata Jammu Tawi Express, Andaman Express and Navyug Express. All CAPFs personnel are entitled to avail this facility twice in a year during leave. The families of Jawans are also allowed to travel in these trains alongwith the serving members.

7. TRAINING:-
BSF has five National centres of excellence, recognized by the government of India which impart specialized training in commando, motor transport and maintenance, weapon and tactics, training for the dogs & dog handlers and bomb disposal.

Over and above, doors of our training centres are open to other central police forces, state police organizations and trainees from friendly countries.

(a) COUNTER INSURGENCY & ANTI TERRORISM SCHOOL (CIAT)
In order to provide anti-naxal operations training and to conduct realistic refresher training for ANO unit, BSF has established Counter Insurgency & Anti-Terrorism School (CIAT) at Karahali (Bangalore). The Pre-Induction Training of Bns being deployed in ANO is being conducted at CIAT.

8. ACHIEVEMENTS IN SPORTS
Since its inception, Border Security Force has held a glorious record in the field of sports. The prevalent sports culture in the Force always inculcated the spirit of healthy competition among its Officers and Jawans. The encouragement of sports activities has borne fruits which is evident from the performance of BSF players in national as well as international events. In recognition to the outstanding performance, the BSF sportsmen have so far been awarded with 1 Padma Shri, 17 Arjuna awards and 2 National adventure awards.

For the first time, BSF Women Motorcycle team “Seema Bhawani” performed motorcycle stunts during the Republic Day Parade 2018. The team showcased its driving skills with daredevil stunts like Salute to President, Fish Riding, Side Riding, Faulaad Shaktiman, Mobile PT, Bull Fighting etc. President of India, PM of India and ASEAN leaders present on the dais and other dignitaries in the audience too applauded the women bikers.

9. SACRIFICES IN THE SERVICE TO THE NATION IN 2018

Apart from securing 6386 Kms of International Boundary with Pakistan and Bangladesh, BSF troops are deployed on Line of Control in Indian Army operation control, in Left Wing Extremism infested areas of Chhattisgarh and Odisha, in CI Ops (Counter Insurgency Operations) in Manipur. BSF is also called for Internal Security duties. This year, 22 valiant Bordermen have sacrificed their lives on the altar of duty, security the sovereignty and integrity of the Nation.