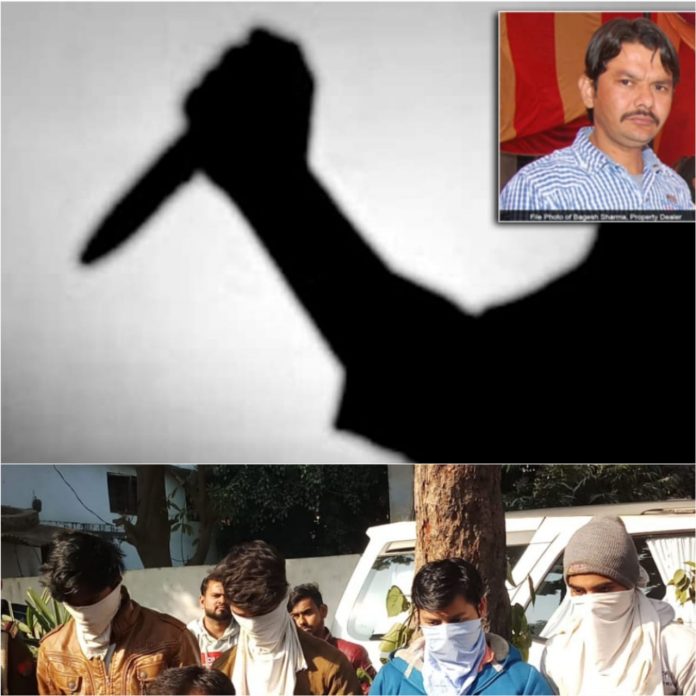 Ghaziabad: The Ghaziabad police has arrested 4 accused in connection with the murder of financier in Nandaram within 60 hrs. of committing crime under PS Sihani Gate and claimed to solve the crime which was committed in lieu of money.

The above crime was committed by the friends of the deceased due to transaction of money. The police solved the murder mistory with the help of  CCTV footage and on the inputs given by informant. The said crime was committed on the night of December 14th in which a young man’s throat was cut and was recovered in Nandagram area under Sihani Gate police station.

Bagesh Sharma, who worked as a financer and a property dealer was killed who was the son of Bijendra Sharma, a resident of Nureenagar Sahani.

While disclosing the incident in a press conference the SP city, Ghaziabad Shlok Kumar said, “The deceased had given 20 thousand rupees on interest to the accused; Vicky’s father two years ago. In turn he had to repay the loan in four equal installments of Rs. 6000/- with interest, of which three installments were paid. But the last instalment was over due and was still pending. Due to this, Bagesh had abused Vickey and Rahul for the remaining  installment. On which, Vicky  called his friends Gaurav and Nitesh. All the above persons were already inabbriviated conditions and further after drinking alcohol again, Rahul brought a knife from his house. Thereafter all the persons were called by Gaurav and we’re asked to get out of the office of Bagesh and stood himself in a deserted place.Gaurav came out of Bagesh’s office after taking a bike behind him. Further he went ahead and stopped four others together.
Gaurav and Vicky attacked on Bagesh with a knife to kill him.
When the accused were succeed in their motive to kill they thrown the dead bodies in a nearby drain. The police investigated CCTV footage from various angles, then the accused involved in the incident were exposed.Detainee accused are Vicky son of Vikas, Rahul son of Vinod, Gaurav son of Ashok are Nandgram residents however, Nitesh son of Suresh, is a resident of Missladhihi near Dasna.
Bike used in the murder and knife used in the crime have  been recovered on the identifications of the accused.”