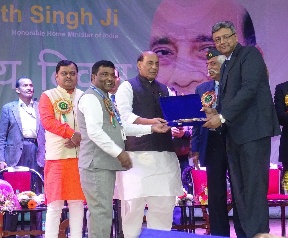 Commenting on the award, Mr. Rajesh Sood, Executive Vice President and Chief Distribution Officer, DHFL Pramerica Life Insurance Co. Ltd said, “We are delighted to receive the “Pride of India” award from Honorable Union Home Minister Shri Rajnath Singh. DHFL Pramerica Life Insurance has a very deep relationship with Indian Army and we take pride in the fact that out of the total workforce of the company, around 34% are ex-servicemen who are employed at different levels in our Defence channel. This award recognizes the Community Engagement programmes which DHFL Pramerica Life Insurance has been running successfully in collaboration with the Indian Army and will further motivate us to take our relationship with the Indian army to the next level. ”

DHFL Pramerica Life Insurance is closely associated with Indian Army in its various Philanthropic activities. The company has signed MoUs with the AG’s branch of the Army headquarters under which it supports various troops’ welfare initiatives and activities. The Prahri & Param channels have been specially curated by the company to serve the financial protection needs of the Armed Forces & Central Armed Police Forces (CAPF).

“Pride of the Nation “award has been organized by Veterans India Martyr’s fund which is an organization of veterans of various fields led by Ex-servicemen. The organization works with the motto of spreading nationalism and patriotism in the country for nation building. During the event Veterans India Martyr’s fund honored and provided financial assistance to the Next of Kin (NOK) of soldiers who have laid down their lives for the nation’s safety and security, while fighting the terrorists and safeguarding the borders in the year 2018.