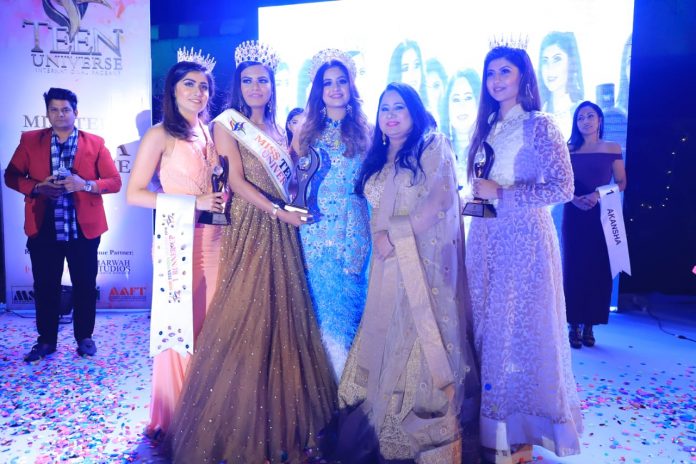 Apurva who hails from Mumbai and is currently pursuing Bachelor of Architecture from Thomas Jefferson University, Philadelphia. 19-year-old Apurva has now advanced to the next level of the competition and will be representing India in Panama for the most sought-after title of Miss Teen Universe 2019. “I can’t explain in words how happy and proud I feel at the moment. Winning this pageant will be one of my biggest achievement in life. I thank the jury for choosing me for the big stage. I am very excited about representing India at the global stage,” said an elated Apurva.

The runners-up include Palak Kohli and Chavi Mehal from Delhi. 19-year-old Palak emerged as the first runner-up. The experience from this stage will definitely help me get better in future,” said Palak. “First of all, I would like to congratulate Apurva for winning tonight. ,” said Chavi , second runner up Miss Teen India, 2019, I also want to thank National Director of Teen Universe Jasmeet kaur for this whole show and Shristi Kaur (Teen Universe for 2017)

The crowning ceremony of Apurva was done by the previous year’s winner Srishti Kaur. Srishti Kaur said, ” My best wishes to all the winners and i am sure they will give their best and bring back the crown to India as i did in 2017. I can see the immense talent Apurva has in her and i am always there to help them too”.
Speaking on the occassion, Jasmeet Kaur, National Director, Miss Teen India Organisation. who is the brain behind this show said, ” Its great to see young and talented girls from different part of India participating in this mega show. I am overwhelmed by the response i got from the participation and feel they will make India proud at Panama.”

Srishti Kaur from India was crowned Miss Teen Universe 2017 at the sixth edition of the pageant held in the Ruben Dario National Theatre in Managua, Nicaragua. She was the first ever Indian-Asian winner of Teen Universe pageant. Srishti beat 25 contestants from across the world to win the pageant and is included in the list of Top 30 under 30 young achievers by Hindustan Times apart from this more achievements