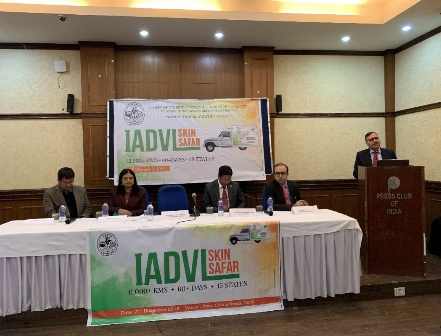 The van will be covering areas like Delhi-Gurugram-Karnal-Sonipat-Mumbai-Pune-Goa-Bangalore-Chennai-Hyderabad-Kolkata-Guwahati-Patna-Lucknow-Gwalior-Agra-Noida etc. The whole idea is to make India aware and to educate about skin problems, myths and facts about skin and hair conditions like leprosy and vitiligo.

Dr Rohit Batra , Dermatologist, Sir Ganga Ram Hospital, and Chairman IADVL People Connect Cell, said, “People have often heard about ‘yatra’ by political parties for their personal purposes. But here the Skin Safar Rath, an ambitious activity is scheduled over a period of 60 days, travelling a distance of nearly 12,000 km covering 18 states in India.This is aimed to bring awareness about skin health and make sure that qualified dermatologist is the right person for any skin problem. We have planned LED screen on Rath which will show educational documentary and street play videos to create awareness among general public in their regional languages. They will be making people aware about myths and facts of acne, fungal infections, leprosy, vitiligo, and other skin problems.”

Dr Mukesh Girdhar, National Vice President IADVL, said “Vitiligo commonly known as leucoderma is a skin disorder where the pigment cells in the body are affected. . Vitiligo affects about 0.5% to 1% of the population in worldwide but as high as 3% prevalence has been reported in India, where considerable stigma is attached to the disease. It can start at any age, but about half of those with vitiligo develop it before the age of 20, and about 95% before age 40. It affects both genders, and all races and ethnicities. The course of the disease is very variable. Owing to several myths concerning vitiligo it has been more than often that people have been outcast. Vitiligo does not affect the daily activities of the person. It is this social stigma that needs to be addressed and awareness is essential.”

There are strong social stigma against leprosy, vitiligo and other skin infections, etc. India is currently running one of the largest leprosy eradication programme in the world, the ‘National Leprosy Eradication Program (NLEP)’. The after effects of leprosy can be social rejection, loss of employment and sometimes as distressful as the failure to obtain proper housing. IADVL is now the official partners in NLEP. They also organised one day symposium( Aug 25th) along with NLEP & WHO and coming out with a strategic plan to combat leprosy.” Talking about available data on leprosy, Dr Dinesh Kumar Devaraj, Joint Secretary, IADVL, said, “Currently leprosy prevalence in India is 0.66 per 10000 due to Leprosy Case Detection Campaign (LCDC). there are high endemic pockets of leprosy being identified, so it is in pockets. Both factors unique to the organism, clinical presentation and due to lack of public awareness there is a delay in diagnosis of leprosy. Multiple efforts are on by government now in form of LCDCs for early detection of leprosy cases in high endemic pockets (Courtesy SIG Leprosy Dr Santhosh).”

Talking further Dr Rohit mentioned, “The quackery is the primary concern for any medical field and primarily in terms of skincare. There are several constraints like connectivity issues, shortage of doctors in the rural areas, etc that leads to the prevalence of quackery in India. Doctors without the required professional qualification and degree not only cannot address the medical issue but also deteriorates the condition. According to recently released medical reports over 50% ‘doctors’ in country are practising without formal degree. Thus, we are also aiming to address the issue of quackery through this Skin Safar. This will travel across the length and breadth of the country and thereby address the serious concern.”

Talking further Dr Dinesh mentioned,” The event also discussed the after effects and the new developments of the case of the ban of fairness creams and skin ointments containing steroids. All creams containing corticosteroids are now should be available only after prescription from November 1st. Schedule H drugs. This was after our first hearing in Delhi high court on April 12th. A few FDCs containing 5 drugs also banned. IADVL ITATSA took a active role and presented before Kshirasagar committee also”.

So, taking a pledge to spread awareness about skin infections, abuse of steroids and skincare ointments, leprosy, vitiligo, and prevalence of quackery, Skin Safar by IADVL will surely mark a milestone in the history of dermatology.