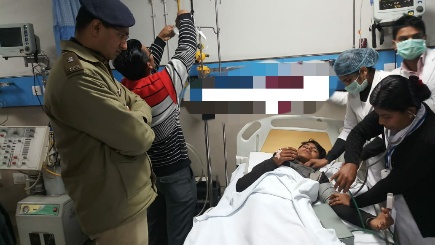 Ghaziabad: Ghaziabad Police today arrested one criminal after an exchange of fire in Bapu Dham chowki area under Kavi Nagar police station. During interrogation, police came to know about he was evading his arrest and was wanted in dacoity and rape cases.

The police when started enquirying from the arrested person he was being identified as Naushad Banjara. He was wanted in dacoity & rape cases in PS Muradnagar under Ghaziabad itself. He is also an Rewardee of Rs 50000/- on his head after he was evading arrest and was declared proclamation. His arrested was an outcome of exchange of fire from the police and the arrested perso when he was trying to flee from the spot after giving dodge to police. But police personnel were caution and also exchange fire to nabb him in whin the SI Vipin also got injured.
Both were admitted in Hospital near Kavi Nagar for primary medical assistance where conditions of both the arrested person and the injured police personnel are stated to be stable.