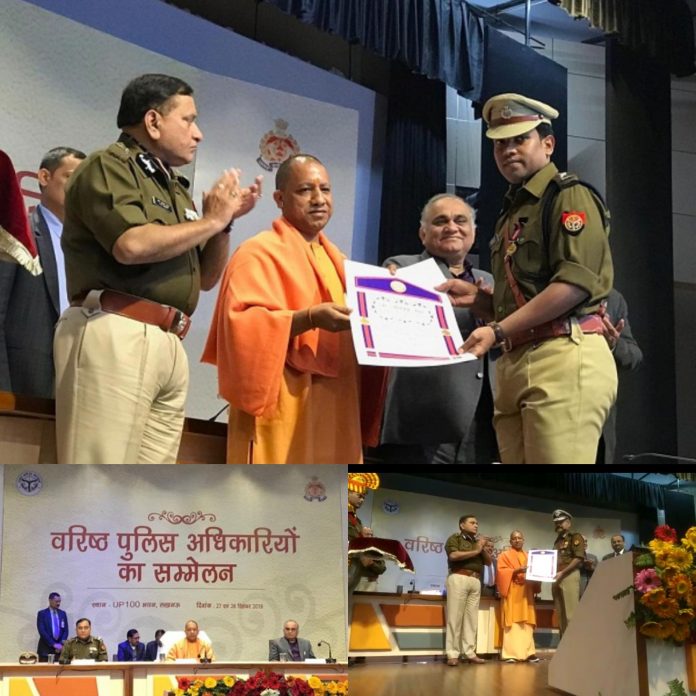 Lucknow : The STF SSP; Abhishek Singh and ADG Meerut Zone; Prashant Kumar were awarded in a special function held in Lucknow today. The award was given away by UP CM Yogi Adityanath in presence of DGP O P Singh for excellent contributions of these above two officials.

While Abhishek Singh as SSP STF has worked excellently and has controlled crime and has also nabbed all criminals, Ine and Drug Mafia besides Examinations Mafias and he has checked all illegal activities in the entire UP.

Not only that, all the examinations in UP for recruitments are now being organised without any nexus of question solvers and all such Mafias have been booked in almost 6 to 10 months.

Recently, STF SSP Abhishek Singh had arrested many solvers gang operating from UP & Bihar. Some of the gangs and it’s members were operating in UP and taking contract against money for public appointments in the last 6 to 10 months. Many drug and Wine Mafias have also been arrested under direct instructions of STF Chief Abhishek Singh.

On the other hand, arrival & posting of Prashant Kumar as ADG Meerut Zone is seen as good police administration inspite of western UP which has always been recognised as den fir crime and criminals. But after joining Prashant Kumar the law & order situation in Western UP has drastically improved.

Further it is important to mention here that the hard core criminals of these areas are themselves surrendering before police and want to live in jail insread of outside jail as they are furious of being encountered by police. So they are themselves surrendering to live safely in jail.  In the past 1 year more than 2 dozens of criminals have been died in police encounter, in Western UP alone.

This award functions was organised in UP 100 Bhawan where all courageous officials were awarded because of their exemplary work carried out by them in the past 1 year.