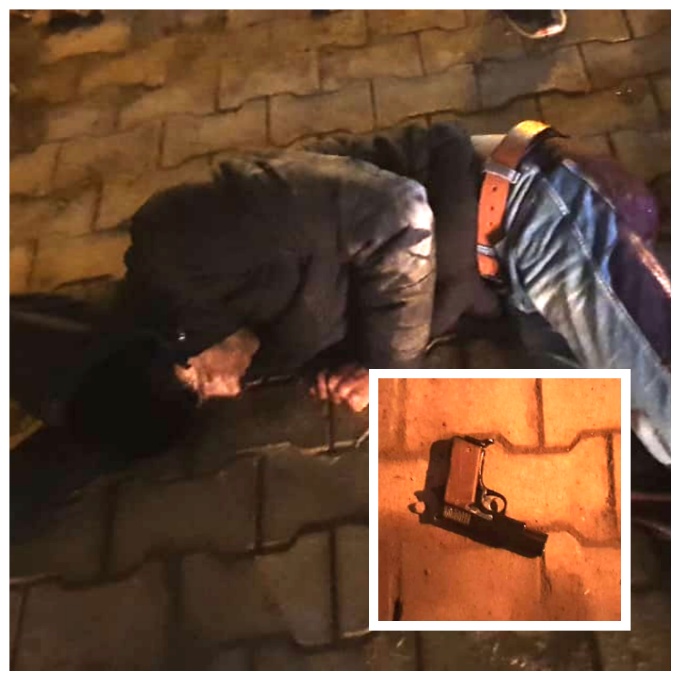 Ghaziabad: A vicious crook who was carrying reward of ₹50,000, arrested after shootout at Navyug market under Kotwali police station. In this exchange of firing 2 constable are also injured. police seized one pistol with live cartridges and a Vehicle from his possession.
A incident of shootout between crook and police were reported Near Navyug market Area under Kotwali Police station in mid night.
In one side where people of Ghaziabad were slept in their house’s in peacefully other hand in winter of January, As per instructions of SSP Ghaziabad, Jaikaran Incharge PS Kotwali Guided his Police Team for tight Patrolling, during the patrolling, a car appeared police warned that car to stop but the driver did not stop the car and started firing at police. In self defence police also replied and fired back till crook didn’t stop firing at last Police got success in arresting of  a crook who was identifed as  Mintu alias Manoj, had many criminal cases registered against him in many police station.


According to SP City Ghaziabad Shlok Kumar , ” Kotwali Police arrested Mintu alias Manoj after exchng of firing where he got injured and our 2 constables Ashok and Rajendra are also injured, according to police inquiry he had many criminal cases which is registered in many police Stations of NCR.in the searching process police recovered a car, 1 Pistol with live and fired cartridges”. ” He is a history sheeter from Gautam budhnagar, UP Govt have declared ₹50,000 reward on him” added by SP City.