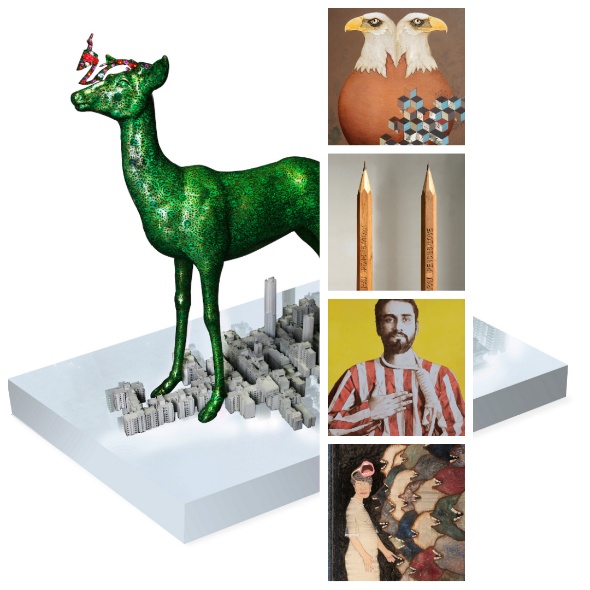 VOICEOVER revolves around what we experience around us and place-making overlaying accounts of space, time and the world as we ‘live’ them and ‘see’ them. “The relation between what we see and what we know is never settled,” John Berger. It is about translating and overlaying as part of the cultural practices that define and characterise contemporary experiences. It is being used both as a mechanism and a metaphor to reflect on the multiple and intersecting circuits of contemporary creative and cultural production.

VoiceOvers, brings together a cluster of artistic practises that define and characterise contemporary experiences. It is . Through their own experiences, grounded in their own personal anecdotes and critical engagement, they reflect with the ongoing debates over issues of politics, religion, gender, identity and tolerance.

Usually many things get translated or explained in such a way that one fails to see the ‘other’ meanings or meanings that lie hidden in the interstices. The objective of the exhibition is to highlight the different ‘marks’ of differences, practices, beliefs, concepts, practices that is being used as a tool within our existing contemporary social and political structures and the intensity with which it is being harnessed within the notion of the complex ‘multicultural’ setup.

Voiceover is about voicing the ‘third meaning’. It is as an analysis of the three orders of meaning as coined by roland Barthes – the informational, the symbolic and the signified: emotional- value. It is at this third level of meaning-making, the content of the exhibition ‘voiceover’ is placed. The recurring themes of experiences from the everyday are being retold and rerouted as spaces of active engagement with multiple accounts of collective memories. The works selected for the show are infused with a sensitivity to how “long views” – the narratives of history or relationship with space, nature, things, and people – come alive only with the addition of “close-up” stories with undercurrents, fragments of history, and close-ups from the everyday that weaves these experiences on a personal and individual level. The show acts as ‘anchor’ where contrasting situations stand together as separate entities and also as an inter-dependent part of a single whole.

Using Voiceover as an anchoring device, a variety of practices are brought together which translates and resonates the characteristics of contemporary engagements. It is the coming together of contemporary ‘situations’, which occur simultaneously. The specificity in the works are like the ‘servings’ of real ‘situations’, as units of an episode not as direct and visible reportage of events in the real world. usually when these ‘situations’ get translated, ‘meanings’ filter out through the interstices in the episodes. These interstices help understanding the constructed reality in nature, politics of identity, migration, class-politics, power-politics and more.

French philosopher and social theorist, Jean Baudrillard highlighted the fundamentals of ‘reality’, that is being taken over by perceived reality which in his theory is a construct of power, culture and media. power and politics has saturated the society with such constructs that there is no ‘seeing’ beyond to understand the ‘real’ reality. Jean Baudrillard in his writing about reality and hyper reality, talks about the tendency where reality and its ‘real’ meaning is replaced with signs and symbols that are constructed by culture, media and power. Voiceover as a voice from a source outside and something ‘above’, about the world of the real, opens a dialogue which directs the spectator to the ‘real’ reality or the reality of what one often does not see. Typically, voiceover is marked as a discourse from within the reality of things creating a new perspective, allowing us to glimpse the objective world, to see through the reality as it is being portrayed.

while tracing the practice of the artists, their work identifies with a strong and independent view of the world, dipping into collective memory, using different kinds of narratives to sometimes reach ‘real’ reality. Their practice has a well-articulated theoretical and social framework. They oscillate between, realist modes of representation and an imaginative realm, always trying to mask and/or unmask some pertinent issues. They are known to be engaging in such debates, which discuss ways in which art can be critical about contemporary social questions, using metaphors as pointers not as political activists, making plain political statements as some slogan or propaganda. Their works as notes to the public are like inscriptions and traces of reality surrounding us. They bring questions to the foreground caused by the paradoxes of that reality, mostly reflecting its contradictions.

Articulated within a specific mode of encoding, these works presented in the exhibition, foregrounds reflection of our current times, programmed with symbolic interpretations, negotiations of the quotidian, and strategies of creating satires of the everyday evidences. These encoded fragments engage and negotiates – knowledge creation, subjective cartographies, interventions with power, proximity to nature and the intuitive reflections of the now and the future,. A complete new way to ‘see’ …

The exhibition is conceptualized and curated by Meena Vari. (Independent curator and Art Consultant and Dean, Contemporary art and Curatorial practice & School of Media, Arts and Sciences at Srishti Institute of Art, Design and Technology).

A comprehensive exhibition with works of seventeen artists from different part of India and abroad. The works presented are in different medium ranging from film to paintings