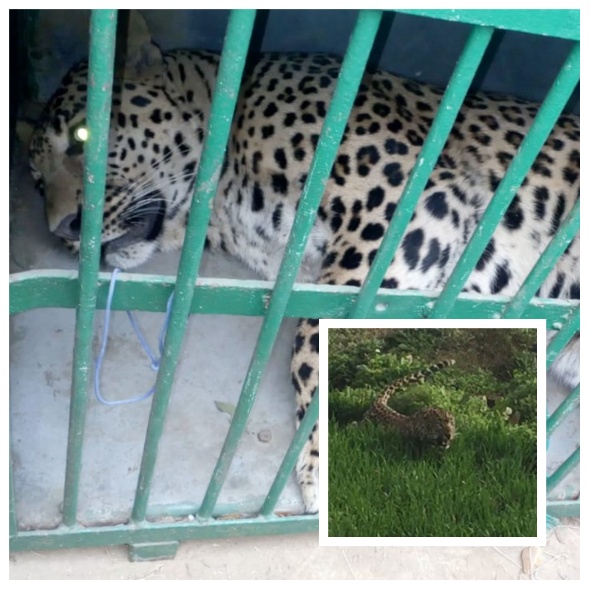 Greater Noida: In a joint operation by PS Ecotec 3 and Forest team captured a leopard from Sadulla pur village after tranquilizing wild animal which was seen and in Sadulla village. However no casualty reported.
In the morning, in Greater Noida there was a hue and cry about a leopard and the matter was reported to the local police under police station Ecotech 3. On reporting the matter the entire administration of Gautam Buddha Nagar swung into action to catch the dangerous wild animal.

Meanwhile a news flashed that came about a leopard attacked a person and he got injured.

On receiving the news, the forest team as well as police team of PS  Ecotec 3 reached the spot and tried to capture the leopard. After 5 hours of hardwork with coordination of forest team, local police and villagers, they succeeded after tranquilizing the leopard fell unconscious was brought in side the cage.

There were much crowd where peoples of near by areas came to see the leopard. This could quickly rescued because of proper coordination of police and forest team and the leopard was caught within 5 hrs of seeing and reporting  to the police.

The SP Rural Vinit Jaiswal informed to News Editor of , “A News Of India”, we had received an information about the leopard seen in Sadulla pur village under police station Ecotech 3 immediately police rushed to the spot and also coordinated with forest department. The Forest team also responded immediately and after tranquilizing the leopard it was captured in a cage, when it fell unconcious and was taken over by forest team in an animal ambulance of forest department.”