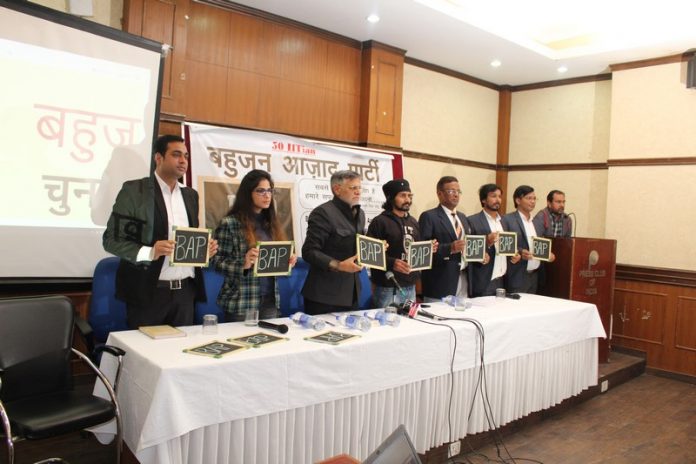 New Delhi: Bahujan Azad Party ( BAP) which was created in december 2017, by 50 IITans is gradually growing to realise the meaning of Bahujan and now this party BAP, has become inclusive and unique party for all progressive citizen, mainly youths, farmers, workers and businessmen with a dream to contribute in nation building for which Bhahujan Azad party stands.

The (BAP) is organised its first press conferance from New Delhi ( India) to send a message that we are now ready to realise our dream for a developed and progressive India.This  dream has always been cornered by almost every existing political parties, and such parties are running like an enterprising house and killing the constitutional spirit.

We as a party are taking this as an attack on constitutional spirit, and the dream and aspiration of the mases (Bahujan) as a challange and ready to fight back for the cause of social democracy, till today no parties have done anything concrete to realise the dreams of our masses (Bahujan) so we came forward to weedout the culture of subordination, money power, muscle power and violance that has became accepted part and parcel of  Indian Politics.

We are here to announce today that our party (BAP) has got its Election symbole form ECI (Election Commission Of India) and that is “SLATE”, this symbole fits well in the vision and mission of this party, from this dais, the BAP is also announcing that we are going to contest 2019, General Election from 9 states (Bihar, UP,Punjab, Maharastra, Telangana, Rajasthan, MP, Jharkhand, J&K) on about 100 seats.

Our main issues in this election will be focusing on our agenda of employment for all, equal education for all, better and free health facilities, reviving the backboon of our economy vis revolutionary change in agriculture, industry and manufacturing sector.

Our party is firmly committed  to realise the vision and mission of our constitution that is social democracy. Naveen kumar who is a passout of IIT Delhi, is leading this party, Naveen believe that this nation has invested a lot in him and he must pay back to India by serving for making India a developed nation this central responsibility has always been disregarded by every political parties. He is firm to stand for ensuring justice, as envisioned in our preamble and to infuse scientific temperament in our society which is missing there because of no piliticle will to develope our nation on scientific line, his national goal which he emphesise is to provide at least “one job to every household”.

Sarkar Akhilesh,  graduated from IIT Kharagpur in 2014 says that politics for him is like a sacrifice of his easylife ticket granted by the renound institution of our nation, but the party who claims to be the crusader of social justice are nothing but a business house which is dangerous as well as hinderance in realising development and social justice via social  democracy. With this temprament he joined the politics.

Sumeet  Kumar Jatav, an IIT graduate from kharagpur in year 2014, says that being silence on what is happening undemocratic and against constitution would be like commiting crime against youth and will erode the fabric of social cohesion.

Anand kumar Maurya, 2006 IIT Delhi graduate, a successful business man with a running stsrtup in Bangkok, has come back to serve the marginalised. He is hopeful for realising the social democracy by the vision and mission of this party.

Amit, a graduate from IISc. Banglore in 2015 says that why we have such an education system   which seems as looking at moon for most of our Bahujans.

Dr.Komal who  did her M.B.B.S from K.G.M.C, Lucknow has a vision for building AIIMS like medical facilities to ensure proper health care by professionals and provide a safe and fearless space for doctors community backed by improved R&D facilities.

Miss. Akshara passout from U.I.T Uttrakhand speaks that women are always considered as subordinate and in this party she feels comfortable and share equal space in diciding on any issue, the culture of sidelining women is a practice in every party other than (BAP).

Professor Arun Kumar Chaudhary, who has worked in the movement of Kanshi Ram ji for 27 long year is the mentor of this party, and he believe that these party (BAP) which is led by leaders with such courage at this young age have all potential to make India a “Golden Bird” again.

Advocate Ashok Arora, a senior and famous lawyer from Supreme Court of India, Ex. Secratery SC Bar, well known for his effort in restoring justice for downtrodden and women, and transperancy at every step in the process of democracy is mentoring the party. He is also the legal advisor of (BAP) and has espreesed  full faith in these young, intelligent and dedicated leaders. He also believes that they are capable of realising the noble mission of the preamble, and would restore the constitutional spirit to make India a wonderful country with vibrant social democracy.

Parshant kumar Parmanu, a passout from Hindu College Delhi University, in the year 2015, who is Hons. in botany stand against all type of institutional crime and have strong belief that only a party led by vibrant youth having sense of justice and vision for a developed India can stop such systematic and untimely demise of our  learned youth, and that can be stoped only by establishing social democracy as visioned by Dr. B. R. Ambedkar