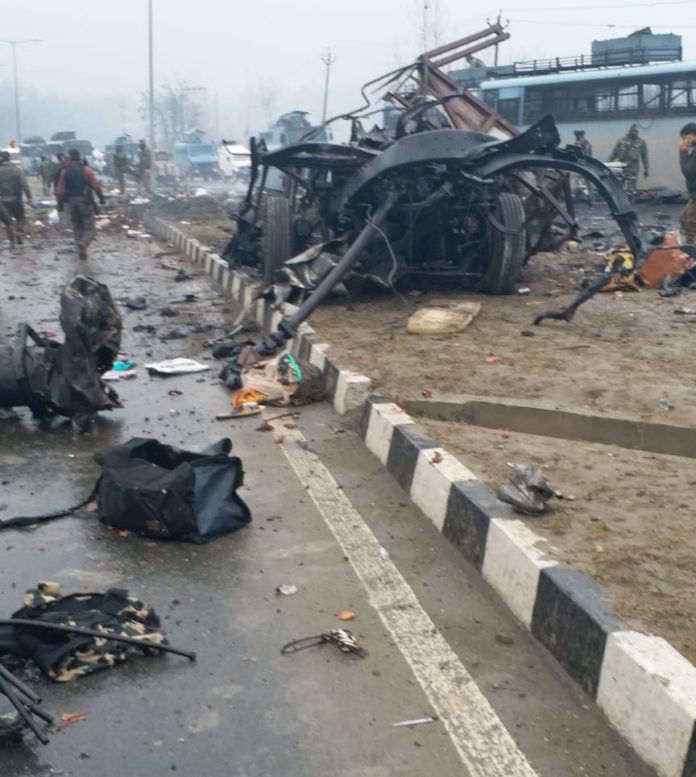 Pulwama: A massive explosion targeted a CRPF convoy in Awantipora area of South Kashmir, killing nealy 40 CRPF personnel and succumb to injuries several others.  It is the deadliest attack in the state in two decades. Terror outfit Jaish-e-Mohammad has claimed responsibility for the attack.

Police sources say that the attack was likely carried out by a suicide bomber, who rammed an explosive-laden car into the CRPF convoy bus coming from Jammu to Srinagar. According to the sources, There were 70 vehicles carrying 2500 personnel in the convoy and one of the vehicles came under attack.

Prime Minister Narendra Modi condemned the dastardly terror attack strongly. He said, Sacrifices of our brave security personnel shall not go in vain. The entire nation stands shoulder to shoulder with the families of the brave martyrs. May the injured recover soon.

Reacting to the terror incident, Congress president Rahul Gandhi termed it a “cowardly attack”. Gandhi wrote on Twitter, “I’m deeply disturbed by the cowardly attack on a convoy in J&K where our brave men have been martyred and many others wounded. My condolences to the families of our martyrs. I pray for the speedy recovery of the injured.