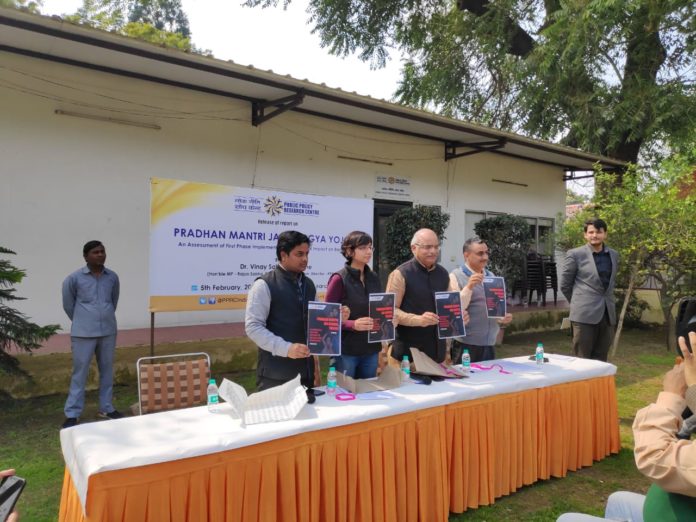 Ayushman Bharat- Pradhan Mantri Jan Arogya Yojana is a paradigm shift in the health care ecosystem of the nation. It is a movement from sectoral, segmented and fragmented approach of service delivery through various national and State schemes to a more comprehensive and better converged and need based service delivery of secondary and tertiary care. Coverage under PMJAY has increased by over 300% of what it was under RSBY, covering approximately 50 crore beneficiaries. And with a cover of INR 5 lakh per annum per family, this scheme is a game-changer.
The scheme is expected to shape the new healthcare ecosystem and define the new parameters of a cost effective, patient centric and technology-enabled healthcare delivery. With its strict monitoring mechanism and potential to propel growth of quality care providers would foment their thrust.
In its crucial first phase of implementation, Public Policy Research Centre conducted an on-ground assessment of the scheme to understand how the scheme is changing the entire ecosystem with special focus on beneficiaries. The study was conducted in eight districts across four states of northern India viz Himachal Pradesh, Haryana, Uttar Pradesh and Uttarakhand. The team interviewed over 600 patients, relatives and other stakeholders including government stakeholders, hospital stakeholders (both private and public), grass root workers including ASHA workers, ANM, Pharmacists, Common Service Centres (Lok Mitra Kendra), Panchayat functionaries and Zila Parishad representatives. The research highlights certain important aspects in respect of the scheme’s impact on the healthcare ecosystem and socio-economic impact on beneficiaries. The report was today (5th March, 2019) officially released by Dr. Vinay Sahasrabuddhe, President, ICCR, MP Rajya Sabha and Director PPRC and Dr. Sumeet Bhasin, Director PPRC at the PPRC campus.
In terms of its impact on beneficiaries, It was observed that beneficiaries that under PMJAY, beneficiaries have been accorded a matter of choice in terms of selecting a health care provider. The choice is dictated by quality, experience and speciality rather than financial aspects. Beneficiary interviews also revealed that there was a significant preference for private hospitals, which is in turn pushing growth of quality private health care providers in tier 2 and tier 3 cities in terms of quality, infrastructure and speciality. Standardization of services under the scheme and a strict monitoring mechanism is ensuring a equitable services for all. Further, a strong monitoring mechanism has ensured that the focus of health care is on outcomes and patient experience. Digitization backed by a robust software ensures a leakage free implementation of the scheme.
In terms of attitudes and perceptions, beneficiary interviews revealed that people are now tending to health care problems on priority, they are departing from a common practice of overlooking or putting off doctor visits due to financial concerns leading to worsening of illnesses. Several case studies pointed to a trend that people are now visiting doctors for their health care issues, lingering for decades.
Another significant impact of the scheme is freedom from cascading impact of economic burden levied as a result of health care costs. Around 80% of the beneficiaries interviewed revealed that they had taken debt some time in their lives to pay for catastrophic medical expenses. Further, prior to PMJAY, while bearing huge medical costs, children’s education and fixed assets such as familial property being the biggest casualties. Case studies also revealed that the scheme was also found to have a significance for the elderly, women and the disabled. The government support has helped infuse an element of self-respect and dignity.
The policy ensures a positive movement towards a system whereby private and government healthcare is governed by common principles and financed by low-cost health insurance, equitably available to all. The study also brings to the fore the significant role of Ayushman Mitras, who are forebearers of the scheme and its face for the common man, adding an element of ease of access and mentoring for the beneficiaries.
Under PMJAY, a de facto price regulation has been brought about through package rates and has brought the private hospitals under the common umbrella. As the scheme extends equitable health access to the poor, this would inadvertently lead to emergence of good quality private hospitals in rural areas as well. Augmenting the Tertiary care system, the top packages utilised under the PMJAY are Cardiology, Orthopaedics, Urology and Neurosurgery. Hence, making the segment approachable to the poor.
With the passage of time as PMJAY would go universal covering even the non-poor households, even the most premium hospitals would not be able to charge huge margins ultimately leading to change of the entire health ecosystem.