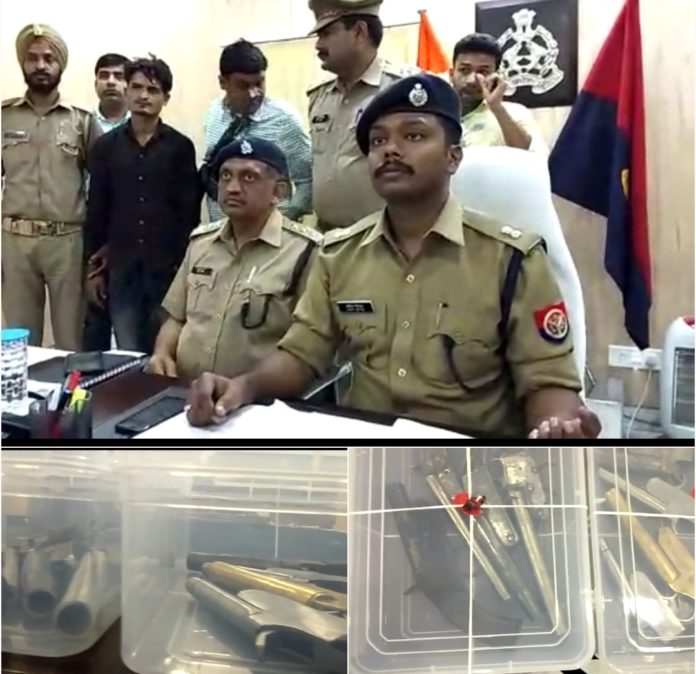 Moradabad: Crime branch of UP police and SOG revealed an illegal arms factory which was being running under Katghar police station and a person who was alleged to be kingpin of this illegal arms factory. In this regards police arrested an accused and seized 10 fully made illegal gun and some other incomplete gun and gun making instruments from his possession.

Loksabha elections are just about to start and for sefety & security purposes police in the entire state is beefing up security measures. Accordingly, Moradabad police also geared up to control crime. During this period police never takes any chance which can lead a major jolt for the administration so in this regard Moradabad police had received an information about running illegal arms factory under police station Katghar. When the information found to be a genuine one after its confirmation from other reliable sosources, Crime Branch, SOG and PS Katghar police raided particular areas for which the team had certain inputs of crime being carried out and also arrested a crook from the spot but another crook succeded in fled away from the spot. In this raid, police also seized all manufacturing equipments of arms and machines which help to making illegal arms.

Ankit Mittal updated to A News Of India on the subject and informed, “police ad received information about illegal arms bring made in a factory under PS Katghar and raided where a crook namely Mikki was arrested and his college absconded the plaace. During the raid police seized 10 completed arms and other equipments besides arms making machines from the spot. As per arrested accused, complete arms were used to sale in open market in between Rs 3 to 5 thousand only.”