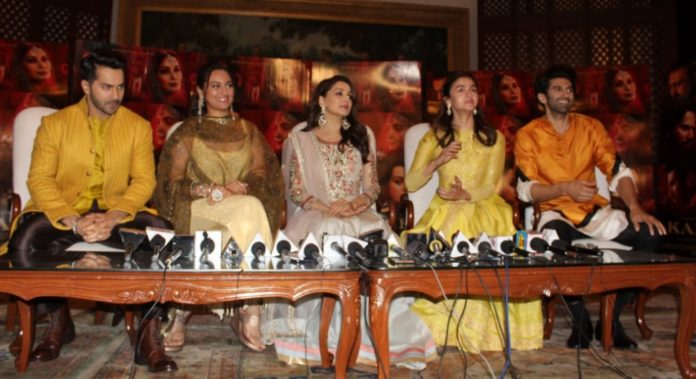 New Delhi:  Kalank movie Stars – Varun Dhawan, Alia Bhatt, Madhuri Dixit, Sonakshi Sinha and Aditya Roy Kapur came to Delhi to promote their movie. The press conference was held at The Imperial Hotel, Delhi. The film is directed by Abhishek Varman and produced under the banner of Fox Star Studios and Dharma Productions. The movie will be released on 17 April 2019.

Present at the event, Madhuri Dixit spoke about her character Bahar begum in the film, “This character is very different from characters I have portrayed in the past. Bahar Begum in kind of closed and introvert character while in Dedh Ishiqiya and other movies I was more out there.”

Alia told about her role as Roop in the movie, “My journey has many ups and downs in the movie.” She also about Madhuri Dixit being supportive to her while shooting song Ghar More Pardesiya, She said “ Madhuri Ma’am told me that next time when you’ll shoot a song like this, just come to me three days before, I will give you the tricks and train you personally,”

Varun spoke about the title of the movie, he said “The title is purely fictitious,it does not describe love. We are here to entertain you. Don’t mix movies with reality.It can be a question or have a question mark in the end.”

Aditya spoke about his career options, he said, “I will soon be seen in more films now. I am recently shooting for a film now.” He also spoke about preparations he did for Kalank, “I read books from the era of the 40s and did my research to get close to my character“.

Sonakshi spoke about women portrayal in the movie, “I am playing the role of Satya in the movie. And all the three women seen in the movie are portrayed as strong women. They have their own journeys and as the story will unfold you will definitely enjoy their journeys.”