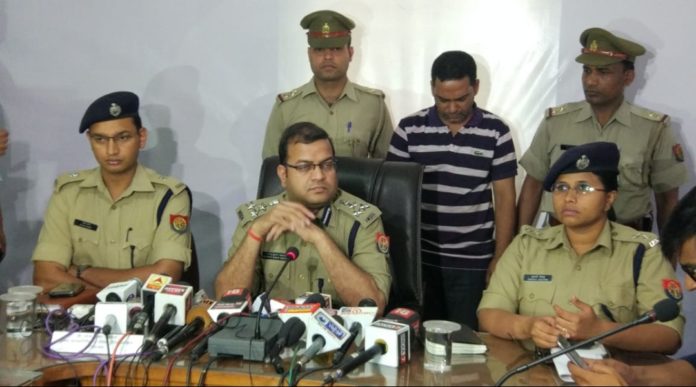 Ghaziabad: Sumit who had allegedly murdered his wife and three children in Indirapuram was arrested a day before yesterday from Udupi in Karnataka and was brought to Ghaziabad yesterday. Two days back, the software engineer namely Sumit had allegedly killed his wife Anshu Bala; a teacher by profession and his three children; Prathmesh, Aarav and Aakriti in a flat at Indiarapuram in Ghaziabad, police said today in a press conference who was brought to Ghaziabad after being arrested in co-ordinating with Udupi police from Udupi in Karnataka.

On the night of Saturday, Sumit had served sedative-laced cold drinks to his wife Anshu Bala (32), son Prathmesh (5), daughter Akriti and son Arav (twins aged 4) and slit their throats, as informed by SP City Ghaziabad Shlok Kumar, in a press conference which was specially organised to inform media about arrest of Sumit who was the main accused in the crime of entire family murder in Indirapuram, as alleged by Ghaziabad police.

The bodies of all the deceased were found after 22 hours of commiting crime on Sunday. Infact, the main accused Sumit had fled away from the crime spot by train and had sent a whatsapp message to his in laws and other family members in WhatsApp group where he had accepted to admit committing crime and killing to his wife, sons and daughter, as described by SP City Shlok Kumar in the press briefing.

Sumit Kumar is a software engineer and had recently was out of job who hails from Jamshedpur in Jharkhand whereas, Anshu Bala whom he was married in 2011was originally from Saran district of Bihar.

Sumit was employed with an I T company in Noida but was recently unemployed as he was removed from job. Subsequently he gone under depression after losing his job this year and was in debt also. Resultantly he went into depression and started taking some drugs, as informed by police and this was the reason of altercation between husband and wife. However, his wife Anshu Bala was was also employed in a school where she was teaching children and also running tuition classes and was able to earn her livelihood in absence of Summit’s emoloyment. Anshu’s father was also helping him meeting in day to day family expenses, as he was also living in nearby area of Vasundhra in same city.

The crime came to notice when Sumit Kumar posted the video narrating how he killed his wife Anshu Bala and his children Prathmesh, Arab and Akriti on intervening night of Saturday-Sunday from a running train said the SP City Shlok Kumar. He further informed he would commit suicide for which he had already purchased poison.
The police have launched a hunt for Sumit Kumar. His phone was not reachable, hiwever the last location of his mobile was Ratlam in Madhya Pradesh but was switched off, as reported by Ghaziabad police.The Ghaziabad police and the drugs department sealed the medical store and arrested its owner for allegedly selling potassium cyanide to Sumit Kumar. The medical store’s licence was also expired two years ago but was not renewed, the SP City informed. A day before yesterday Sumit Kumar was arrested from Udupi in Karnataka in co-ordinating with Udupi police when his phone was switched on a day before yesterday. After his arrest, he accepted his crime and was arrested and a case of murder has been filed against him.