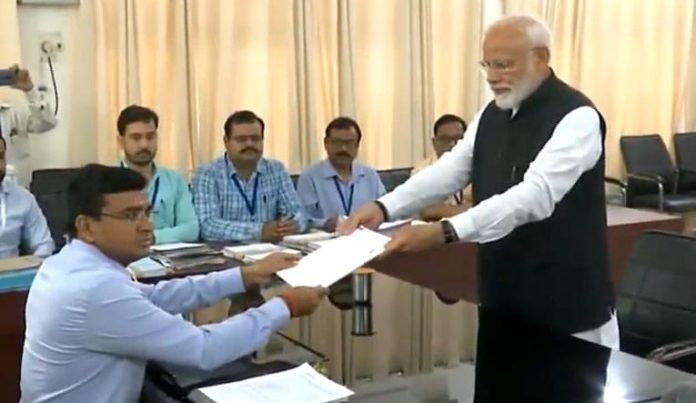 Prime Minister Narendra Modi on Friday filed nomination on the fifth day of the nomination on Varanasi Lok Sabha. As soon as he entered the collector room, he met with proposers. He touched the feet and took blessings of female proponent Annapurna Shukla. She later said she blessed him to continue with his excellent work and wished him all success. Modi was accompanied by a galaxy of top BJP and NDA leaders in a massive show of strength for the country’s ruling alliance.
Bihar Chief Minister and JDU chief Nitish Kumar, Union minister and LJP chief Ram Vilas Paswan, Shiv Sena supremo Uddhav Thackeray and Shiromani Akali Dal patron Parkash Singh Badal were with Modi at the Collectorate as Modi filed his papers. BJP leaders, including party president Amit Shah, Uttar Pradesh Chief Minister Yogi Adityanath and senior Union ministers Rajnath Singh and Sushma Swaraj, were also present on occasion.
PM said, “People of India loved me for good governance and made up their minds to give another term to Modi. I had won yesterday with the true love of Banaras people. The people of the holy land gave me immense love, and I will pay off their debt in the form of development again.