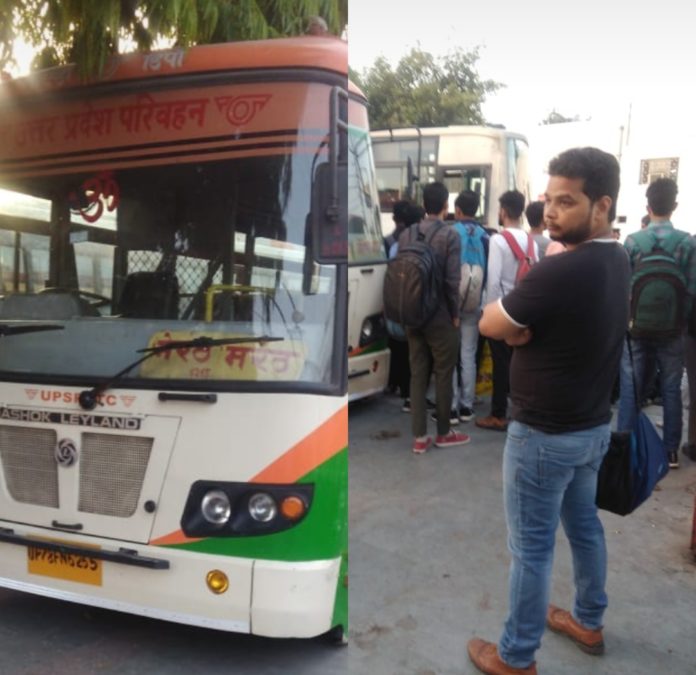 Noida: The conditions of roadways buses in Uttar Pradesh Remains like before. The state government has provided new buses to all the depots but still, the operations are not doing their job in the right way. If we talk about Noida Depot, there is plenty of buses here. But the problem of the passengers remains the same. There is no one to hear in the public grievances. This is a route to Noida Depot which gives the highest amount of income. According to departmental sources, 26 buses were plying on Noida Meerut route, 20 buses from Noida to Kotdwar and Bijnore. But the problems are still not resolved. When the team of ‘A NEWS OF INDIA’ visited Bhansali bus station in Meerut at 6:30 AM on 29th April, then the two buses UP 78-5850 and UP 78 6265 were parked here.Both the bus drivers and operators were absent in their buses.This caused travelers to face a huge pitfall. It is ubiquitous to see the number of riders high on Monday. People join their work or job after spending two days holiday. It is not the first time when this kind of chaos has been reported. This kind of problem always persists on every Monday. But no solution has been found so far. Travelers face chaotic problem often on this route. Around 50 percent of the women also travel in these buses. When our team talked to ARM Anurag Yadav over the phone, he has asked written clarification from the staff of both the buses.

But, such clarification still raises many questions. Will this improve the roadways system? However, after the complaints of passengers and Considering their hassle ‘A news of India’ has published this news before also. After the news broke our team, then ARM Stanedra Verma was transferred and new ARM Anurag Yadav has been given the charge. There were seen some improvement after the arrival of Mr. Yadav, but the situation seems to deteriorate again.