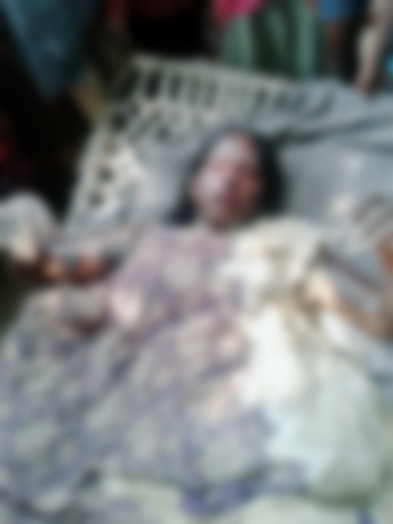 @ Saket Dinkar | News Editor
Kasganj: A women; Rekha in her mid thirty age who was allegedly poured kerosene and then burnt by her husband; Rajesh and others in Viraunchi village under police station Soron  in  Kasganj district on 26th of April and was reffered to Aligarh Medical College for further treatment, today died in the government hospital. But it is more painful and shameful that the Kasgunj Police was only a silent spectator in this case of a heinous crime of burning a lady.
It is understood why no arrest was made till date in the case, as police had spared all the accused and FIR lodged with Soron police in a non serious offence under sections 307 and 323 wherein police is competent to grant bail to the accused. No burning section was slapped in the FIR with hidden agenda of Soron police and accused were spared from arrest till date. Further, role of SO, Soron, Kasgunj as well as investigating officer in the case is questionable. The Yogi government is claiming to provide good administration and no criminals shall be spared. Either the criminals should be behind the bar and or they have to leave the state boundary. But in the same Yogi goverment the role of Kasgunj Police is dubious and it seems through this case they are themselves promoting crime and sparing criminals. Even the family members of diseased has alleged police is moving as per money and muscle powers of accused as they are well off and have also power in hands in the present government.
One of our legal experts advocate Vinay Sharma says  primafaceae this matter is related to burn and killing but police registered FIR with section 307 and 323 instead of 304. In this case it is also a matter of investigation why she was burnt if it for dowry then 304 B should also be slapped otherwise 302. In this case police should have lodged FIR under section 304 which is more serious offence than 307 and 323 and after the death of victim section section 302 should have been also imposed against all the accused in this case and they must be either on police or judicial demand after their immidiate arrest.
Although there was delay in lodging the FIR in this case and even after immediately receiving it by the Chowky Incharge personally given by the brother of the diseases Mr Vishesh Kumar, the FIR was not registered in this case untill unless “A News Of India” reported the matter prominently on its website which is being monitoreo by senior state goverment officials of UP on a day to day basis.
Even the matter was also reported to Dial hundred by victim’s brother Vishesh Kumar and Dial hundred police had seen the victim alone n arrival, lying on a cot with more than 60% burnt in the house and all the accused had fled away from the house before arrival of police. Then the neibours had taken the victim to the nearest hospital after hearing hue and cry of victim. The victim was given primary treatment and was reffered to Aligarh Medical College, as she had more than 88% burnt as reported by doctor who attended her in the local hospital Kasgunj.
When the matter was came to “A News Of India” who had prominently published the news which was being seen by senior police officials of UP police and when the SP was asked to report the matter, the FIR in this case was lodged on 28th April. Not only that, the dereliction of duties of Chowky Incharge; Anil Kumar and SO Soron; Ripu Daman can be ascertained as it was clearly a case of pouring kerosene  and burning the deseased; Rekha but Soron police registered this FIR under sectio 307 and 323 of IPC and no section of burning was slapped against all the accused involved in this case.
Infact, it is very clear that the police has globe in hands and the palms of the police had been greased by the accused just to get police shelter, as alleged by diseases family members, so no action was taken in the case and investigation is still pending.
Even after lodging FIR police never visited the victim to record her statement and she was well in this position to describe the entire facts of this case to any bodu, who was lying in the hospital in the last 10 days almost. “A News Of India” has recorded the statement of victim and she has well described the entire episode of this case and even named all the accused and how the case had taken place, in series. Police never taken interest in the cas to further investigate the matter and record the statement of the victim.  Nor police carried out raids to arrest the accused in the case, at any point of time. All the accused in this case are untracable by police which is also being criticised as dubious character of the Soron police specially in this heinous crime of burning a women.
Primafaceae, it came to the notice that the husband of women Rekha; Rajesh used to beat her regularly and she had informed her parents and brother. Brother of Rekha Vishesh Kumar had reached Viranchi to receive and accompany his sister Rekha to his village. Mean while  Rekha husband had poured kerosene on Rekha and had burnt her.
Vishesh informed this A News Of India about entire event how the villagers taken away her sister to the hospital where doctor described her more than 60% burnt condition and her condition was serious as per doctor.
When News Editor of “A News Of India” talked to SP Kasganj Ashok Kumar, he informed in this regard,  “yes I had seen the tweet of ‘A News Of India’ and had directed the SO to lodge an FIR in the case. Now when you are describing that the victim has died I will direct police officials to add further relevant section in the case.”