Moradabad: Police has succeeded in solving the robbery of 4 lakhs 80K from the cement merchant on dated 15th July,2019. In this regard Moradabad Police has arrested 2 people after the encounter and recovered a stolen bike and country made pistal from their possession. Police seized 2 lakh 52K rupees out of 4 lakh 80K as recovery.

Around 3 am, PS Thakurdubara
and PS Dilari were checking  near Mordan Public School, Suraj Nagar area where police saw a suspicious moving bike with two people sitting on it. Police indicated the bike rider to stop the bike  but the bike rider did not stop  and started firing on the police where in
Sub Inspector got injured.

Seeing this sudden attack, the police also retaliated in which both the bike riders were shot and injured. One of the people caught is Imran and one is named Salim.
SP Rural Uday shankar said, During checking, two people have been arrested after shoot out  one of whom is Imran, the other’s Salim, both of them were involved in the robbery of the Cement merchant, about ₹ 2 Lakh 52K has also been recovered from them. 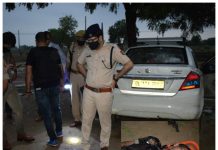