Ghaziabad:  Ghaziabad police arrested two accused; Gaurav and Kuldeep after an exchange of fire under Vijay Nagar  Police Station. Both the arrested accused are harded criminals and were wanted in connection with  many cases of loot, dacoity, murder and ransom due to which police had announced a sum of Rs 25 thousand each on the heads of arrested accused on whose head police had annouced a reward and they were harded criminals of Rs 25000 each separately.

Ghaziabad police also seized Illegal arms and bike recovered from arrested accused.
According to police, During checking near  DPS   service road, police saw a moving suspicious  bike in which two person were riding. Police alarmed to stop the bike but bike rider did not stop the bike but also started firing at police.
Police also retaliated and and a person got injured who was identified as Gaurav resident of Shapur Bamheta who was carrying a reward of 25000, Ghaziabad. Gaurav was absconding in loot case in vijay nagar. Police also arrested his partner Kuldeep, who was trying to escape during the shootout. Police seized a bike and illegal country made pistol from arrested accused. 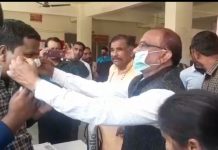