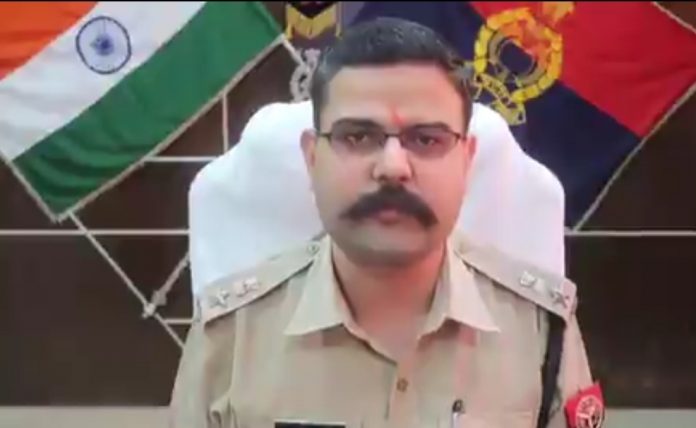 NOIDA: The GB Nagar police today sent a very loud & clear message to its all officials that corruption by any official, at any stage, shall not be tolerated and whosoever is found involved in corruption or bribry, law will take its due course of action against even them. This was the message clearly gone after seven FIRs under various sections of IPS were lodged and an FSO was also made an accused in the crime.

No doubt, the action of SSP, G B Nagar; Vaibhav Krishna will certainly going to open a show case of G B Nagar police functioning on behalf of Uttar Pradesh government whose main focus now is to make transparent and corruption free governance after Yogi Aditya Nath came to power and became Chief Minister of the state. This case shall also sensitise and invite public to come forward and lodge complaint about corruption and bribery.

In the present case there were 7 gangs operating in NOIDA who used to apply by fire vendors on behalf parties with nexus of FSOs bypassing following guidelines in this regard and without submitting online application, which is one of the pre-requisite and is must to be follow for applying for fire NOC.

These gangs members working only for fire NOC as an organized crime with seven gang S and atleast more than one dozen members operating for these gangs.

In this case, FSO first and a fire vendor of Fire Station Noida Phase-I have been arrested today.  A total numbers of seven organized gangs have been named in the investigation so far, more than 450 NOCs have been obtained by these gang members illegally.  An FIR has also been filed against them.  There may be some more arrests likely to be made soon.

SSP Vaibhav Krishna told in a press conference held in the Police Control Room today at Sector-14A and describe about this praised crime by 7 gangs operating for obtaining and liasioning for issuance of fire NOC bypassing online application, “FSO Phase 1 Kuldeep Kumar, whose audio regarding talking about bribe for issuing fire NOC went viral on the social media and the matter was probed in which it was found that the audio belongs to Kuldeep Kumar and director was issued lodge FIR against Kuldeep Kumar and other persons involved in this illegal NOC issuance gang and the FSO has been arrested. The Fire Vendor Arvind Gupta whose voice is also there in the audio was identified who confessed giving bribe for issuance fire NOC has also been arrested. Both arrests have been made at PS Sec 20, after registration of an FIR under “Prevention of Corruption Act”. Further It has come to light that fire vendors used to apply  on behalf of building owners for getting fire NOC rom Fire Deptt after manipulating relevant facts bypass due application process and following due procedure. A total numbers of 7 FIRs under 420, 467, 468 & 471 of IPC Sections have been registered at PS Sec 20, Distt Gautam Budh Nagar against such gang members having nexus with Fire Vendors and Fire Officials. In all 13 Fire vendors have been booked. Hopefully this will give a big blow to corruption in getting Fire NOCs in near future.”

There was talk of money transactions made between two persons for NOCs on social media.  In this regard, Chief Fire Officer Arun Kumar Singh had sent a letter to the SSP G B Nagar and expressed the possibility that the audio to be of FSO Kuldeep Kumar and Fire Vendor Arvind Gupta.

Accordingly, on the request of the CFO, the matter was thoroughly investigated by CO- First, Shwetabh Pandey.  In her investigation report submitted to SSP on 21 September, CO-First described that during interrogation, FSOs Kuldeep Kumar and Arvind Gupta admitted that the voices are of them in the audio, which are being probed.  The money transactions were also being carried out in the month of May 2019 itself.

In the interrogation, Arvind Gupta told that in the audio clip, it is being talked about giving Rs eighty thousand to the FSO for issuing fire safety NOC of the building to Motherhood Hospital located in Sector-48, NOIDA.