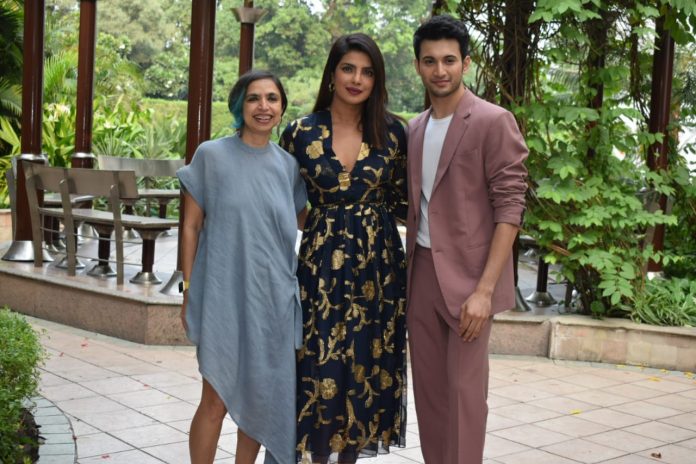 New Delhi:Priyanka Chopra, actor Rohit Suresh Saraf, and Director Shonali Bose came to Delhi to promote their upcoming movie The Sky is Pink. The event was held at the Le Meridien Hotel, New Delhi. This movie will hit the box office on 11 October 2019.

The Sky is Pink is a biographical film directed by Shonali Bose and co-produced by Siddharth Roy Kapur, Ronnie Screwvala and Priyanka Chopra under the banner of RSVP Movies, Roy Kapur Films, and Purple Pebble Pictures.

The film is the return of Chopra after a break of three years from Bollywood. It is based on the love story of a couple spanning 25 years, told through the lens of their spunky teenage daughter – Aisha Chaudhary, who was diagnosed with Pulmonary fibrosis.

Present at the event Priyanka Chopra told about her first reaction when she read the whole script, she called her mom and said mom “I Love You”.

Priyanka told about how this name is given to the movie – she said one day Aditi’s( Aisha’s mother in real life on whose life the movie Is based) son called her and said that “Mumma teacher punishes me because I have not drawn blue color to the sky then she said that do not tell your color of the sky to anyone because your sky should have your choice of color in it whatever the color is. “

The young actor Rohit Suresh Saraf tells about his experience of working with Priyanka Chopra, Farhan Akhtar and Zaira Wasim and well-known director Shonali Bose. He said, ” It was an amazing experience, I learned in every conversation and every bit of the movie from Priyanka Mam. She is an amazing actor and Co-star to work with.”