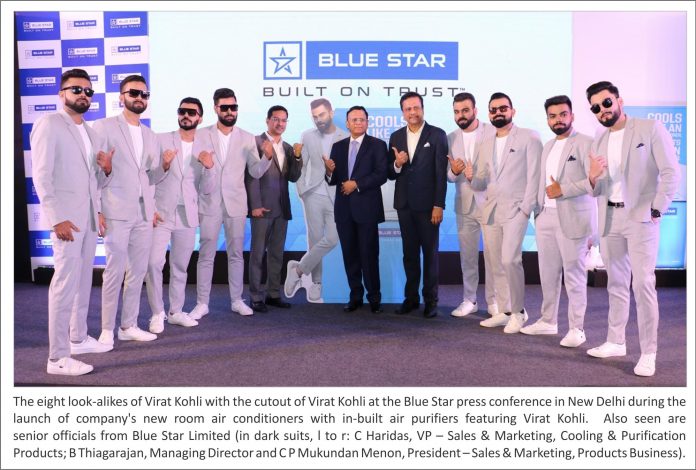 Air conditioning and commercial refrigeration major Blue Star Limited announced today the launch of a new and innovative model of a room air conditioner with in-built air purifier, which cools and purifies the air in the room at the same time.

Pollution levels in India are rising with indoor air pollution getting worse than the outdoor pollution in many cases due to the closed environment of spaces such as a home or office, and the lack of fresh air. Pollutants get trapped and micro-organisms flourish in the stale environment.
What better way to tackle the situation than by using an AC which not only cools your room but also purifies the indoor air at the same time through a single machine.

Blue Star’s new 5 Star inverter AC with in-built
air purifier not only delivers powerful cooling
during summers, but also simultaneously
purifiers the indoor air. It has the capability to
function as a standalone air purifier during
winters, and that too without switching on the
machine’s compressor, thereby ensuring low
electricity consumption. Powered by the unique
Contact Microbiocidal Anti PM 2.5 Technology,
this AC is proven to remove harmful pollutant
particulate matters such as PM 2.5 with a
reduction efficacy of 99.39%. With a unique
Double Stage Fortified Filtration mechanism, it can efficiently tackle micro-organisms

such as bacteria and fungi floating in the indoor air environment, with an efficacy of 99.999%. The SensAir Technology used in this air purifier continuously senses the indoor air quality and speeds up the air purification process automatically when required. Real time monitoring is enabled in this AC through an LED display indicator.

The maintenance cost of the air purifier is also negligible as the key filter operates on the unique Contact Microbiocidal Filtration Technology making it easy to wash and does not require regular replacement, unlike the multi filters in typical air purifiers which have to be regularly replaced. This makes this AC ideal for the residential and light commercial segments.
The 5 Star inverter AC is also designed with Dual Inverter Technology to enable faster cooling during peak summers, has a BLDC Motor for quieter performance, and comes with some unique user-friendly features such as climate control, dual user preference settings, precision cooling, and powerful mode, amongst others. The AC can operate at 52 degree Celsius ambient, delivering extremely comfortable cooling performance.

It’s time to say good bye to polluted unhealthy indoor air, and say hello to cool, pure air with Blue Star’s air conditioner with in-built air purifier!
Foray into the residential segment
Blue Star, which completed 75 years in 2018, had forayed into the residential segment in 2011 and has since grown from strength to strength, year-after-year, by outperforming the industry. The Company’s air conditioners are well known for quality, reliability and durability, and have earned the trust of millions of customers. Making Blue Star one of the significant players in the industry with a market share of around 12.5%.

With the penetration of room air conditioners in India as low as 5-6%, the room ACs market continues to offer abundant opportunities for Blue Star. The Company has already made deep inroads into Tier 3, 4 and 5 towns with more than 60% of its sales coming from these markets. Going ahead, Blue Star intends to make deeper inroads into various customer segments and geographies and grow its market share with a wide array of superior and innovative products across various price points.

Blue Star has a robust distribution network across India with 90% of the Company’s transactional interface with its dealers and channel partners being digitised. At the same time, the Company continues to significantly expand its retail distribution reach. Blue Star’s room air conditioners are available at 5000 outlets in 575 locations spread across the length and breadth of the country in various formats. Currently, Blue Star has 200 exclusive brand stores in the country, and work is in progress to increase it to 250 stores by the end of FY20. The products are also available on various e-commerce portals. The Company has a strong installation and service franchise network to support retailers.

Next phase of growth

In its next phase of growth, Blue Star aims to shift orbit and accelerate growth by penetrating deeper across the length and breadth of India. The Company, by leveraging its brand salience, intends to garner mass appeal cutting across geographies and demographics.

In order to achieve its next level of growth, Blue Star recently rolled out the new festive season campaign, which unveiled Virat Kohli’s association with Blue Star’s room air conditioners. The Campaign began with the launch of a new TV commercial which highlights Blue Star’s new range of room air conditioners that can deliver up to 30% extra cooling when needed with an endorsement, “Owned by Virat, Loved by Virat”.
Further, the Company has rolled out another new TV commercial that talks about its new and innovative product – an inverter AC with in-built air purifier which also bears the endorsement, “Owned by Virat, Loved by Virat.” Since Cricket has mass appeal in India and Virat Kohli’s skills are unmatched in this game, this campaign is apt for the Company, as Blue Star’s persona deeply resonates with both Cricket and Virat Kohli.
Virat Kohli on Blue Star
On his association with Blue Star, Virat Kohli said, “Blue Star is a well-established brand and definitely the best in cooling. So for me, it was a no-brainer to be associated with a brand like Blue Star. I’ve never shot a campaign like this where there so many quirks and so many things happening. It was very different from what I’ve done in the past.
Definitely something that people are going to love to watch, I can guarantee that. Also, it nicely covered the many aspects of Blue Star’s versatility when it comes to their product.”

Management outlook
Speaking to the Press at a conference held at Delhi, B Thiagarajan, Managing Director, Blue Star Limited, said, “Considering that Summers in India are severe, and that air pollution is also a matter of serious concern in most metros, this single product which serves the dual purpose of cooling and purifying at the same time is definitely expected to gain significant traction, especially in the residential and light commercial segments,
in the coming months. Although in-built, the air purifier can also function as a standalone unit during winters without switching on the machine’s compressor, thereby ensuring low electricity consumption as well.”