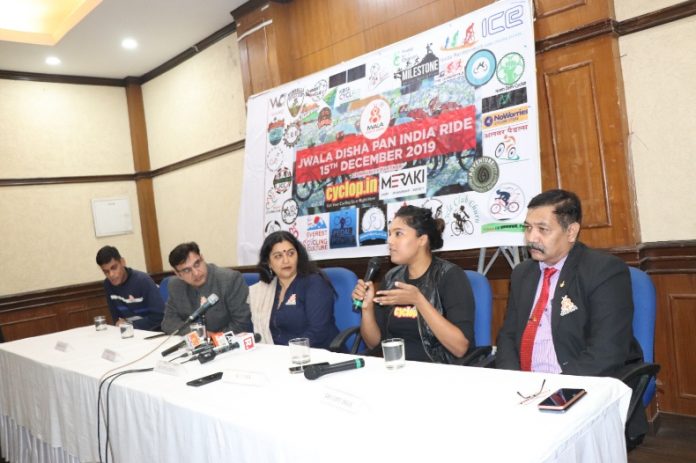 In commemoration of the Nirbhaya case, in Delhi on 16 Dec 2012, an NGO called JWALA was formed by Dr. Divya Gupta. The basic aim of the NGO was “Empowering Women / Girls through Self Defence Training”. Since then, JWALA has trained more than 1 Lac Women/Girls in Self Defence all over the country. When JWALA began conducting self defense classes across government schools in Uttar Pradesh – the team realized there was lot of fear in the minds and hearts of the girls who were trained. That time a need was felt – need of making common people (men and women both) also aware about women empowerment and self defense – the necessity of women.

As female cyclists there was again insecurity and fear – specially when riding alone. There was a need to make this fear go. So the idea struck and Jwala decided to conduct awareness ride on Nirbhaya Diwas – last year it was Dec 16 and this year it’s on Dec 15.

To commemorate the event, JWALA has planned a Cycling Ride “DISHA” is being planned across 50 cities in India. Different Cycling clubs from respective cities have come forward to ride and send a social message across the country about the sensitivity towards safety of the women. The outrage among the people of India is seen with the response being generated. More than 2000 riders have registered themselves on social media to ride for this social cause. All the leaders and volunteers have spent day and nights towards making it a success and send a strong message to the concerned authorities to take note of the necessity of Women Safety.

The President of the NGO Dr Divya Gupta who is from Indore has conveyed her gratitude towards all the enthusiastic Cyclists across India for their participation. CYCLOP founder Ms Malvika has taken personal interest in sending the message across the cycling community through her social media platform. Mrs Renu and Mr Vishal Nagrani was also the force behind coordinating across the clubs and cities and get it organized. All the Cycling Mayors and Cycling club leaders of all these cities are the ones to be rewarded for their efforts. JWALA is forever thankful to them. There are many to thank across cities but at the end of it, it’s the public who has to come forward and spread the message of Women Safety. JWALA is planning to conduct this as an annual event on the closest Sunday to the Nirbhaya Diwas (16 Dec). we are also grateful to the Media personnel who are covering this ride and spreading the message.