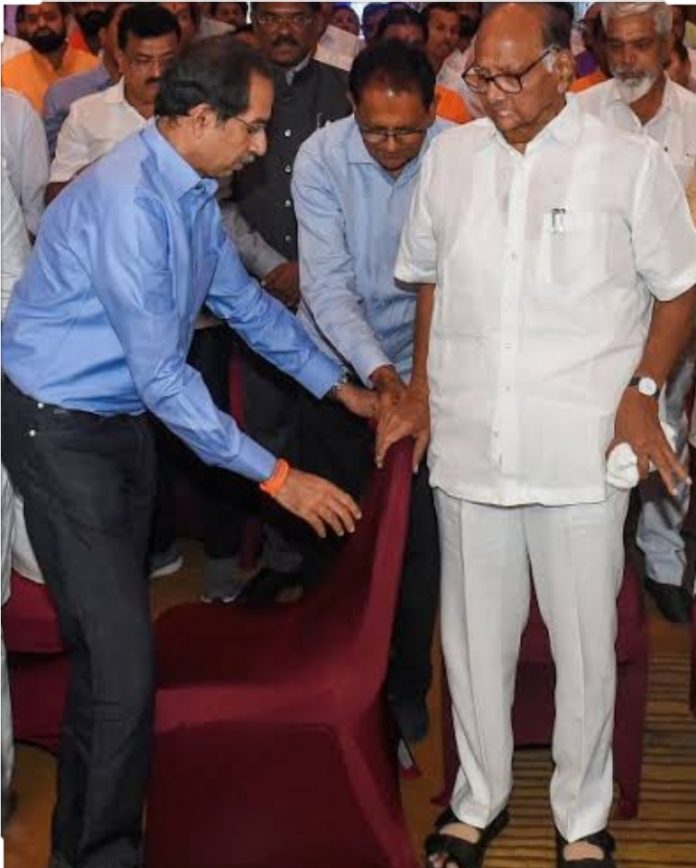 Winter session of Maharashtra assembly which is going on in Nagpur is almost about to end but formation of minstry and allocation of ministerial birth are still to be formed and had has not taken place even after almost a month. Neither CM Uddhav Thakre have satisfied the farmers of the Maharashtra by not clearing their 7/12 UTARA( clear document of loan waiver) nor any decision in this regard has taken by the newly appointed government, which is left the farmers dissatisfied with new government.

Now Sharad Pawar has taken over the issues of public concern and is openly vocal on all such critical issues and has also reached Nagpur to keep things under his controll to atleast gain public confidence. Often in public functions, he openly claims, Congress is ready to accept ministries whatever are being offered and there is no dispute regarding portfolios.

In this allotment of portfolios, the former CM, Maharashtra, Prithviraj Chauhan is clearly other side and is also cornered about by raising his issue initially to start inquiry against Ajit Pawar; the nephew of Sharad Pawar. Who just got clean chit from Anti corruption bureau of Maharashtra in 9 such cases of corruption pending against Ajit Pawar.
On the other hand, the former CM Ashok Chauhan who was mentioned in Adarsh Scam was also suddenly included by congress after extending green signal from Sharad Pawar about Chouhan. However, there is still no confirmation about when exactly what the ministries and departments will be allocated to these three coalition parties jointly came in power. In all this political scenario there is no role for CM Uddhav Thakre to play nor to decide the portfolios and only Sharad Pawar is real power in portfolios distribution behind the scene.

Close sources from Shivsena claims honesty and innocence of Udhav Thakre has also given extra power to the Sharad Pawar. The Shivsainiks are suspicious about Sharad Pawar making every move for on behalf of Sena chief and CM Uddhav Thakre.

Leader of opposition in House and former CM Devendra Fadanvis has claimed the ongoing winter session is flop show ever seen by Maharashtra as no concrete decisions are being taken during this session and the entire session the sheer wastage of public money.
Regarding farmers loan waiver and other developmental programmes for Maharashtra pictured is not yet clear and there is no road map to it.
This is the reason to keep unnatural coalition intact Sharad Pawar is playing his political cards was himself present in ongoing winter session of Maharashtra in Nagpur.

Today Sharad Pawar announced that by this month end portfolios of the newly formed ministries shall be allocated in Maharashtra.

In a sudden move yesterday, Shard Pawar criticised Congress leadership of Delhi for not giving final lists of candidates for allotment of portfolios in ministry from Congress high command. Hence this matter is deliberatly being delayed by Congress leadership and they kept lingering ministry allocated and further government activities and delaying indevelopment projects. Pawar has openly criticized this stand of Congress. Even he has asked CM Uddhav Thakre to talk to Congress leadership in Delhi and Maharashtra both, in this regard.

The absence of functioning of elected and a real governance is still to be experienced by the state and public is suffering out of it, even after voted to power.
All the time only political war with BJP is the one single agenda of present government under Uddhav Thakre under the shadow of strongest man of Maharashtra Sharad Pawar and Congress party of Maharashtra and its high command in Delhi.
State is actually waiting this three party unnatural government to start functioning and performing in the interests of public and for the benefits of other development projects of Maharashtra.