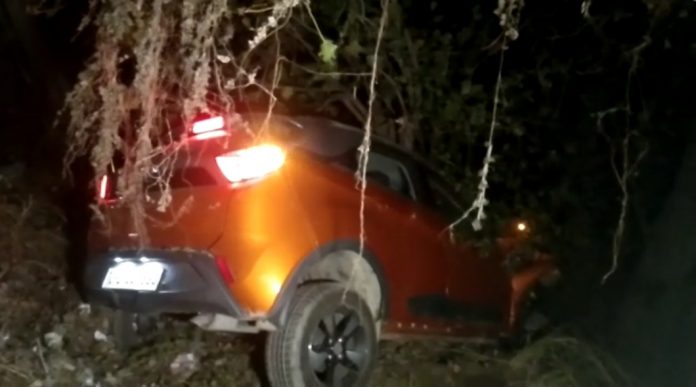 Moradabad: In mid night at Delhi road near Lokoshed a Frightful accident was seen in which a car collided with a bus. During this accident both vehicles were fall down in local canal. In this accident 4 person were injured. Under Majhola police station, at night near about 12 am a bus hit a car. The collision was so strong that both vehicles collapsed in a ditch from the moment. There were only two person, Bus driver and cleaner in the bus. Other hand in car Mohit Madan and Ujjaval Aggarwal resident of civil line were returning from Gajrola after celebrating Birthday party when car was moving at Moradabad Delhi road near Lokoshed Bridge at mid night near 12 am, a bus hit their car. According to Deepak Bhukar, ASP, Moradabad, “A frightful accident occurred at Delhi road in which a bus hit a car and including bus driver and cleaner 4 person were injured in hospital for treatment and further investigation is carry on.” After the accident , the Delhi-Lucknow highway was jammed for a long time, now the police are investigating whether the bus driver was drunk or because of some other reason the bus crashed.
At the moment, there were no passengers in the bus at the time of the accident, and the bus was also overturned before the railway track, if the bus overturned a little further, the accident could be quite serious.