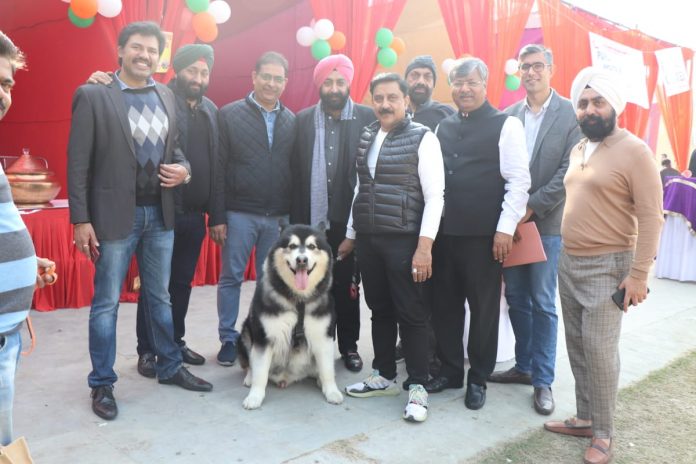 New Delhi: Canis Welfare Pet Club (Regd.) organized its 12th Annual dog show and Pet awareness camp on 26th January, 2020 at lawn no 2 , Punjabi Bagh Club ,West Punjabi Bagh ,New Delhi to promote kindness towards animals and adoption of Indian stray dogs. Through these dog shows the club tries to create awareness among the people of Delhi /NCR about Pet Parenting, Hygiene and how to stop animal cruelty. All efforts were directed towards educating people present there about animal welfare. .Dr. Vijay Kumar, Gen. Secretary of Canis Welfare Pet Club emphasised that the main motive of organizing this annual dog show is to promote adoption of Indian desi dogs and also to create awareness among Pet owners to become more responsible towards the needs of their pets. Dr Sushil Kumar Gupta , MP, Rajya Sabha hoisted the National Flag inside the club premises before the commencement of this dog show..

The Highlights of this year’s dog show are as under:-

The main attraction of this dog show was a dog which had no limbs. The dog belongs to an Animal lover named Malabica staying at Lajpat Nagar, New Delhi. She takes care of 120 stray dogs in her locality. This dog was given award for the best desi dog in this dog show. Malabica’s efforts was felicitated with a memento for her efforts. This dog’s fighting spirit was also highly appreciated by those present. A breed dog owner was also felicitated with a momento.

In the goody bags, pamphlets of awareness regarding animal welfare and how to help strays were provided to facilitate pet parenting. More of this awareness through banners was seen displayed not only in each stall but also all over the dog show premises. More people are taking interest and coming forward to propagate our Moto “Be proud to adopt Indian dogs”.

No commercial activity was permitted in this dog show. Sale and purchase of puppies was strictly prohibited and under our watchful eyes it was ensured that dogs are not subjected to any kind or form of cruelty.

No cage was allowed in this dog show. Pups below 2 months of age were not allowed to participate in the show.

Many organizations who are involved in the welfare of stray animals also participated in this dog show. They also played an important part in spreading awareness regarding animal welfare amongst animal lovers.