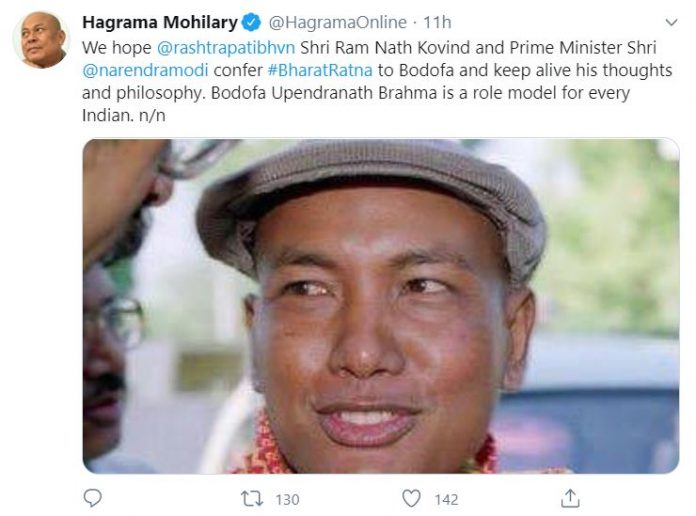 Revered as Bodofa — the Father of the Bodos — Upendranath Brahma, who also was the former All Bodo Students’ Union (ABSU) president, had ignited the Bodoland movement in 1987, which later metamorphosed into a strong and progressive cause.

Mohilary, in a series of tweet, said: “Our leader Bodofa Upendranath Brahma has always remained an icon of Bodo Leadership, Sacrifice and Unity. ‘Live and let live’ was his mantra and he made relentless efforts to fulfill the Bodo aspirations. He had spearheaded the Bodo Movement which ended up in the formation of BTC in the Assam. To honour his work and sacrifice we would demand the central Govt to bestow the Bharat Ratna upon Shri Upendranath Brahma.”

Stating that Bodofa led a democratic mass movement for separate state within the ambit of Indian Constitution, Mohilary added: “He dreamt of not only uplifting the Bodos but the entire backward classes in the state, and to realize this dream Bodofa brought a revolutionary change among society.”

“His life was dedicated for social and economic justice for the entire backward masses. It is time we show our gratitude towards Bodofa for the development we are witnessing today,” he said.

Hoping that President Ram Nath Kovind and Prime Minister Narendra  Modi would confer Bharat Ratna to Bodofa and keep alive his thoughts and philosophy, Mohilary said that Bodofa “is a role model for every Indian.”