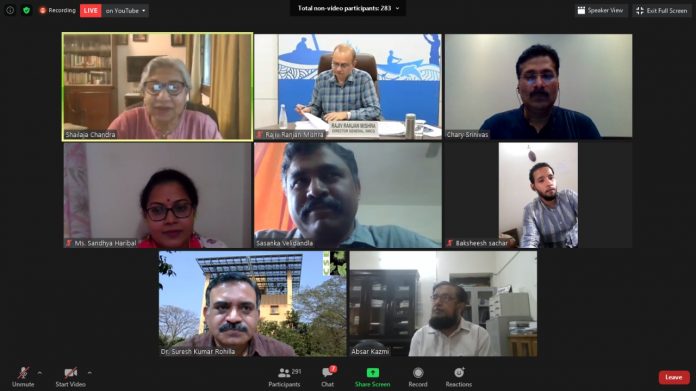 National Faecal Sludge & Septage Management (NFSSM) Alliance brought together country’s leading policy makers and city leaders to deliberate on “Opportunities for Co-Treatment of Septage at Sewage Treatment Plants (STPs)”, through a webinar last evening. The discussions focused on recognizing the potential for cities and towns to convert existing underutilized sewage treatment plants (STPs) to co-treatment facilities to bring down the contamination of water bodies across the country.

The keynote speaker Mr. Rajiv Ranjan Mishra, Director General of National Mission for Clean Ganga (NMCG) said, “Fast but unorganized urbanization has put a load on natural resources. The system has not been able to give as much priority to wastewater management, or any other waste disposal, as compared to services such as provision of drinking water and other infrastructure needs.” Speaking about his experience in Kanpur while working for the Clean Ganga Mission, he highlighted the huge capacity utilization gap that was observed in the STPs, along with inadequate presence of a sewage network across the city. He further emphasized on the need for co-treatment especially in river cities in order to curb the dumping of septage into river bodies, “There is an essential need to focus on the interests of river cities by merging urban planning with river management,” he said.

Talking about the increasing informal urban population, the panelists elaborated on the need for integrated solutions which leave no one behind. Citing the example of Delhi, Ms Shailaja Chandra, Chairperson of the Monitoring Committee for Rejuvenation of River Yamuna spoke about her experience as the former Chief Secretary, Delhi, where over 7 million people in Delhi living in unauthorized colonies did not have access to a sewerage system. “Ultimately all septage used to flow through the storm drains and into the Yamuna, polluting the river.”

The magnitude of the problem was highlighted by Prof. Srinivas Chary, Director, Centre for Energy, Environment, Urban Governance and Infrastructure Development, Administrative College of India (ASCI) who shared that 70% of India’s Urban Households have onsite sanitation systems. The excreta from these systems is carried by unregulated private de-sludgers and often dumped without proper treatment into water bodies. On the other hand, he highlighted that more than 1200 STPs in India are underutilized. During the course of the webinar, the panelists led the discussion on how co-treatment involves treating septage from onsite sanitation systems like pit latrines and septic tanks, by introducing additional infrastructure at existing sewage treatment plants. The objective is to solve the dual issue of utilizing spare capacity of existing STPs and preventing indiscriminate dumping of sewage, especially for households in un-serviced areas.

Though it may sound like a simple solution to address underutilization of STPs, there is considerable preliminary research required before setting up a co-treatment facility. Diving into the Dos and Don’ts, Dr. Absar Kazmi, Professor at IIT Roorkee stressed on the need to assess the current flow and load of sewage at the STP along with monitoring the characteristics of the sewage, before deciding to go for a co-treatment set-up.

Adding to that Dr. Suresh Kumar Rohilla, Senior Director for the Water Programme at Centre for Science and Environment said, “It is not just about putting the infrastructure in place but following up with the right training and SOPs to ensure sustainability in operations and maintenance”. He further added, “Co-treatment of fecal sludge at STPs can meet regulatory standards, but needs to be monitored by continuous testing – which is ensured by CSE’s capacity building programs.”

To make this process simple and actionable for city and state administrators, Ms. Sandhya Haribal, Program Manager at CDD Society, presented the checklist to the participants, providing a practical stepwise methodology that can be undertaken to introduce co-treatment to new and existing STPs. This checklist has been created by the NFSSM Alliance for practitioners to assess the scope for co-treatment of septage at an existing STPs. It can be used by STP service providers and ULB representatives, and will be launched soon.

The National Faecal Sludge and Septage Management (NFSSM) Alliance was convened in January 2016 with the support of the Bill and Melinda Gates Foundation to build national consensus around faecal sludge and septage management. The NFSSM Alliance, which works closely with Ministry of Housing and Urban Affairs (MoHUA), comprises of numerous national and international organizations that are actively working for implementation of sustainable sanitation solutions in the country. The Alliance has been instrumental in the passage of India’s first National Policy on FSM in 2017 which cascaded to 19+ states in India.