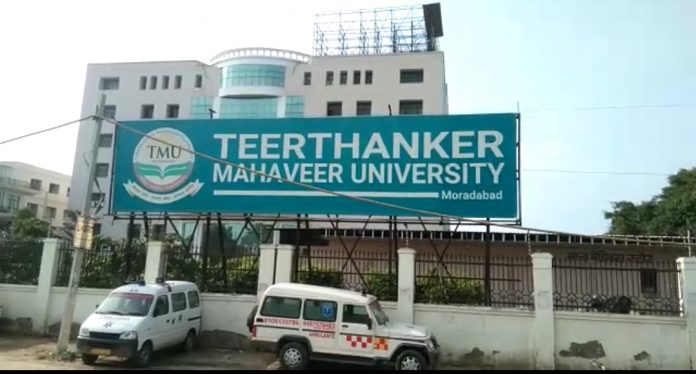 The patient Diwakar Sharma; a Head Constable who was posted in S.SP. office in Bulandshahr and was a resident of Budaun admitted here in this hospital on Friday after detecting Covid-19 positive.

This is the third similar incident of suicide within a month in this hospital. The first case was of a lady and thereafter an ICICI Bank manager who allegedly jumped off from the window of its fifth floor. All these three suicides took place in this hospital within one month so it seems to be arranged and something suspicious. Hence the needle of suspicion is moving around this hospital about its treatment as well as management of Covid-19 positive patients by the hospital employees including medics, para-medics and management of the hospital.

A reliable source of patients and attendents described all these suicides as murder and not handling of Covid-19 patients with due sensitivity and due required medical care by the hospital. The source also quoted the services of the hospital in such a negligent manner. Further it was added that if a fair enquiry is conducted by an independent agency like CBI and CB CID, many facts of all these three murders will come out and the hospital management will be behind bar.  Another source quoted the fact and raised his eyebrow on the functioning of this hospital. He also added that the hospital management has procured all government machineries resulting nothing happened ever after two deaths occurred in a similar manner within 20 days that too as of now so called suicide.

However, the Nodal Officer of the center, Dr. V K Singh, said Diwakar was behaving in abnormal way and his act was differently on Saturday. He suddenly around 9:00 o’ clock tried to attack the employees of the hospital by taking a drip stand on the staff but jumped off the window before staff tried to overpowered him and could have manage the incident. As soon as he jumped off the window he died as he fallen down on the floor. The entire staff collected there after hearing hue and cry.  The police and the hospital management team reached the spot and the top officer was also informed about the incident.

This is the third suicide in the same manner that too within a month which itself is making hue and cry on the incident as it is alleged as suicide but it is not true said an attendant. This is the third death by jumping from the fifth floor in TMU Covid Center.