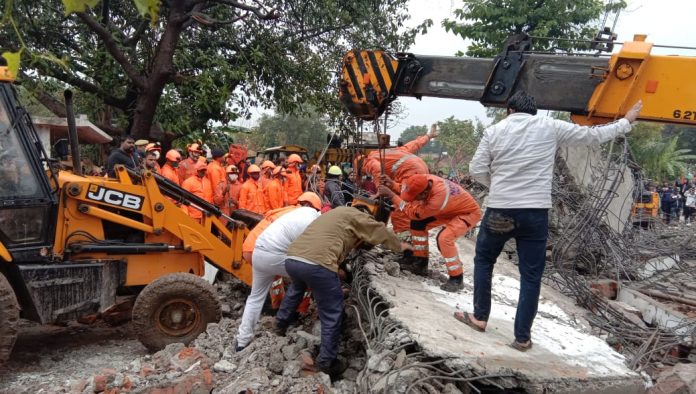 Ghaziabad:  In Ghaziabad district of Uttar Pradesh, adjoining Delhi, a major accident occurred during the rain on Sunday.  16 people were killed and many are still feared trapped under the rubble of the under construction corridor at Muradnagar Cremation ghat  near Delhi-Meerut road.  Ghaziabad police and the fire brigade department and the NDRF team reached the spot as soon as the incident was received.  Relief and rescue work is going on continuously.  State Chief Minister Yogi Adityanath has expressed grief over the incident and directed to provide financial assistance of two lakh rupees to the dependents of the deceased.  DM Dr. Ajay Shankar Pandey and SSP Kalanithi Naithani are present on the occasion.

It is being told that more then dozen people died in this accident, while some people are feared trapped under the debris.  So far, 32 people have been evacuated from the debris, Taking cognizance of the incident.

Chief Minister Yogi Adityanath has said, “I have instructed the district authorities to carry out relief operations and submit a report of the incident.  All possible help will be provided to the people affected by the incident. ”  On the other hand, District Magistrate Dr. Ajay Shankar Pandey told that relief work is going on.  The injured are being rushed to the hospital.  Police and NDRF teams are engaged in relief work.  The dead persons are being identified.  All possible help will be provided to their dependents.