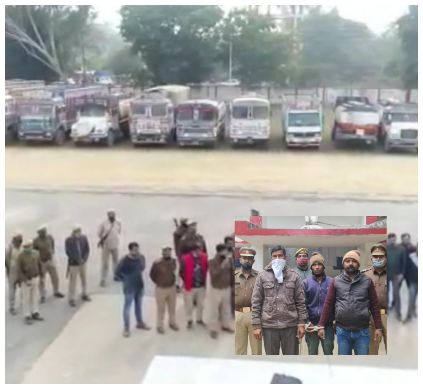 Etawah: Etawah police arrested 3 acused who were doing fraudulent in vehicles registration.
Police recovered vehicles worth 7 crores from their possession.
Etawah police defaced of fraudulent racket who were saling commercial vehicle after changing its chesis number and Register them in another state through NOC.
When this information came in ARTO Etawah, he took action against this racket. ARTO gave  this complaint to SSP Etawah Akash Tomar.
As received this complaint, Mr. Tomer made  6 teams . In these team smart officers started searching of this fraudulent racket.
SSP Akash Tomer self monitoring of these team.
Finally team received a clue in which a joint operation was carried and Etawah  police got success in arresting of 3 persons namely Dilip, Rajeev and Raghvendra and seized many  vehicles which were registered and had NOC in illegally way.
According to SSP Aksh Tomer, “As soon we received a complaint about fraudulent racket who were saling commercial vehicle after changing it chesisi no. by others state like Nagaland etc. They are also getting NOC  for these vehicles from Etawah RTO office” “We took this serious and made 6 team for arresting this rocket and finally 3 accused were arrested and worth near about 7 coroe worth vehicles were recovered from their possession” added Akash Tomer.