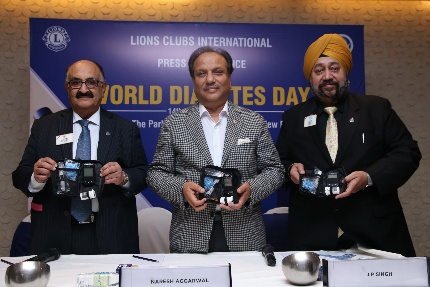 On the occasion of World Diabetes Day on November 14th, LCIF will distribute 700 Diabetes Kits and conduct Sugar Check-ups for over 2 lac patients via Lions Clubs across the country.

Lions Clubs have been reversing the growth of diabetes in India by awareness, diagnosis camps and curing patients from underprivileged areas.

Speaking on its pan Indian initiative on diabetes, Lion Dr Naresh Aggarwal, Chairman, of LCIF and the Immediate Past International President of LCI, remarked,

“Last year, as International President, I launched LCI on it’s boldest journey yet – to reverse the unstoppable rise of Diabetes. 6 crore Indians suffer from Diabetes, and this number doubles every 15 years. However, Lions have come together to turn the tide.

Diabetes also causes many other diseases that affect the heart, blood, lungs and eyes. However, the root cause is simply too much sugar in the blood. 90% of cases can be cured simply by healthier lifestyles. The other 10% require medication; normally insulin.”

Elaborating their initiative Mr Aggarwal elaborated, “Our sincere and committed efforts to create awareness and host Check-ups Camps for patients have already earned us the Guinness Book of Records last year for the largest Diabetes awareness lesson wherein we had set a benchmark by organizing seminars for over 22,250 people on a single day across India. This year too, we intend touching the lives of a huge population across 2 lacs across the country. The rationale is to create awareness about this disorder and act as a catalyst in making them realize the seriousness about diabetes and getting them tested so that appropriate medical attention can be given. LCIF have the best of doctors, dedicated volunteers and skilled workforce who take special care to do this checkup for people. We are planning to set up Diabetes Camps from November 14-18, 2018 where our experts will do sugar tests and distribute over 700 Diabetes Kits which includes Glucometers and 2 lac Strips and Lancets to people who come for their sugar test.”

We have chalked out an elaborate agenda on World Diabetes Day such as sharing leaflets on diabetes prevention. We have installed exercising equipment in public parks so that people from neighboring areas can exercise there and enjoy in fresh environment. We have plans to set up Diabetes Centre’s in hospitals in Delhi for which identification is being carried out,” Mr Aggarwal added.”

Elaborating on the global presence of tackling the diabetes menace and other initiatives, Mr Aggarwal said, “For last 50 yrs, LCIF has disbursed grants worth over USD 1 Billion all over the world, including for Diabetes projects. Globally, we have made possible 9.1 million eye surgeries all over the world. For Campaign 100: LCIF Empowering Service- the target is USD 300 Million over the next three years. For this year, LCIF is also constructing 500 Houses for the people affected by the Kerala floods in India,” Mr Aggarwal concluded.”