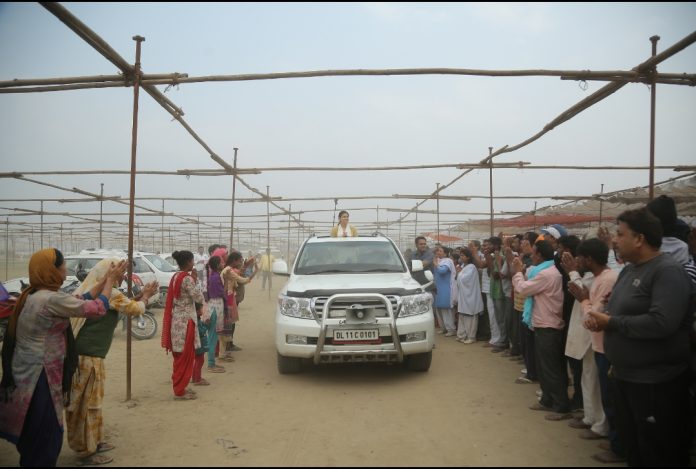 Delhi: The 71stAnnual NirankariSant Samagam will be held from November 24 to 26, 2018. Preparations at the venue, inaugurated by Satguru Mata 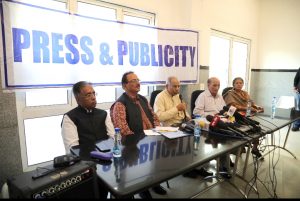 SudikshaJi Maharaj on October 14, are going on in full swing. More than 4,000 volunteers from Sant Nirankari Sewadal and other devotees from various branches of the Mission across the country are working every day.

The venue of the Samagam, for the first time is the Mission’s own land at the SantNirankari Spiritual Complex, Samalkha in Haryana,spread over more than 600 acres.People travelling on G.T. Road can see a glittering township of Shamianas with preparations going on. 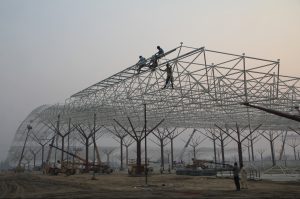 All the arrangements for the Samagam are being looked after by the Executive Committee of the Sant nirankari mandal which has been designated as Samagam Committee, with its General Secretary Shri V.D. NagpalJias Coordinator. The members of the Central Planning and Advisory Board and Central Adhikaris of the SantNirankariSewadal are also associated with the Committee. Each department is being assisted by a number of Sub-committees constituted for various activities.

The main SatsangPandal will be surrounded by various departmental offices and other pavilions showing activities of the Mission. Parking arrangements for buses and other vehicles will also not be far away from Satsang Pandal.

Right behind the Satsang pandal, there will be exhibitions. For the first time this year, four exhibitions will be put up in the same complex. A major part of Nirankari Pardarshani will be devoted to the life and teachings of Mata Savinder HardevJi Maharaj. In addition, the exhibition will depict the history and ideology of the Mission along with various activities such as Samagams, spiritual tours by Satguru in India and abroad and social welfare activities etc. Various aspects of the Mission’s Ideology will be presented with quotations from the Spiritual Heads of the Mission.

The Sant nirankari Charitable Foundation will depict its own activities through photographs and models in a separate exhibition. They include: blood donation camps, tree plantation and cleanliness drives, empowerment of the youth and women, etc. Besides, the Health and Social welfare Department will also have its own exhibition.

As in the past, the Chandigarh branch of the Mission will put up a Children’s Exhibition. Spread over a vast enclosure of tents, it will be primarily based on models and animations, all prepared by children. Its aim is to highlight various principles of the Mission as understood by children.

Devotees coming from outside by rail have been advised to get down at the Bhodwal Majri Railway Station just next to the Samagam venue. Railways have ordered all the mail and express trains also to halt for 2 minutes at Bhodwal Majri from November 10 to December 5, 2018. While devotees coming at Bhodwal Majri will be received by Sewadal and guided up to their residential tents, those getting down at Panipat Railway Station will be provided buses free of charge up to the Samagam venue. Similar arrangements will be made for their return after the Samagam.

Delegates coming from abroad will be received at the airport and provided transport free of charge up to Sant nirankari Colony in Delhi where they all will stay. During the Samagam, they will be provided special buses on behalf of the Samagam Committee for going in the morning and returning in the evening every day. The transport department will hire nearly 100 buses in allfor the Samagam.

The Transport Department has also launched Helpline No. 011-43188666which will be effective from November 20 to 28, 2018 for all the saints coming from outside to attend the Samagam. The Helpline will benefit all the participants arriving at airport, various stations including Old Delhi, New Delhi, Hazrat Nizamuddin,AnandVihar,Sarai Rohilla and SubziMandi as also the Kashmere Gate, Anand Vihar and Sarai Kale Khan ISBT. Besides, this facility will be available to devotees getting down at BhodwalMajri and Panipat Railway Stations also. This will enable the Transport Department to help the saints who may require any assistance regarding transport.

Necessary arrangements for electricity and water supply, sewerage etc. have been made in close coordination with the Government of Haryana and its subsidiary agencies concerned. They include traffic, security and fire-brigade also.

Langar will be prepared and served in every ground. In addition, there will be about 20 canteens across the campus which will provide tea, coffee, cold drinks and snacks. Mineral water will also be available at these canteens. Every care is being taken to ensure cleanliness so much so that Langar will be served in steel plates. There will be 2 machines to prepare Chapatis, while every other service will be rendered by Sewadal men and women and other devotees.

The Publication Production and Distribution Department will put up 13 stalls including 2 in SantNirankari Colony, from where the devotees will be able to pick up the Mission’s literature, photographs, DVD’s, Diary, Calendar and other publication materials.

The Magazine Department will put up its own office to register new subscribers. It will also bring out a Special Souvenir on the theme of ‘Maryada’ – Propriety of Conduct, with articles in Hindi, Punjabi and English.

The Medical and Social Welfare Department will have 14 dispensaries, with a total number of 85 beds to look after any health problem the devotees may have during the Samagam. In addition, there will be 11 first-aid posts and 18 Ambulances (including six 102 ambulances). Arrangements have also been made to take serious patients, if any, to the nearest Government Hospitals in Sonepat, Panipat and Delhi.

Like last year, a team of about 60 doctors from abroad will put up their own health camp for Chiropractic treatment of Orthopedic (Neuro) Chronic patients.

The Samagam this year is dedicated to the life and teachings of the previous Head of the Mission, Mata SavinderHardevJiMaharaj who breathed her last on August 5, 2018. The motto is:MaaSavinder -EkRoshan Safar(MaaSavinder – an enlightened journey of life). Ever since she was married to Baba Hardev Singh Ji in 1975,she completely devoted herself to the service of Satguru and the Mission. During the 36 years when the Mission was led by Baba Hardev Singh Ji, she worked with him shoulder to shoulder.

When the responsibility to lead the Mission as its Spiritual Head got transferred to her as Baba Hardev Singh Ji relinquished his physical form in a car crash in Canada on May 13, 2016, she continued to preach the Mission in the country and abroad with the same tempo. Her emphasis was on adopting God-knowledge in day-to-day life so that human values of love, compassion, peace, tolerance, broad vision, large-heartedness, forgiveness, brotherhood and unity would reflect in every aspect of life at home, place of work or elsewhere. She wanted that every devotee of the Mission should become a role model, a light house or RoshanMinarfor others. She believed that action speaks louder than words.

On November 24, the Samagam will start with the arrival of Satguru Mata SudikshaJi at the venue around 1:00 p.m. After being formally welcomed by Samagam Committee on behalf of the entire SadhSangat, she will be led in a procession up to the dais. Thousands of devotees will greet her with loud slogans, while Her Holiness will also shower her divine blessings on them. As soon as Satguru Mata Ji occupies her holy seat at the dais, she will start the Samagam with a ‘Message to Mankind.’ The Satsangprogramme will conclude at 8:00 p.m. with Satguru Mata Ji’s holy discourse.

The highlight of the second day will be Sewadal Rally from 10:00 a.m. to 12:00 Noon. Thousands of men and women members of Sewadal from across the country and abroad will participate. The rally will be followed by Satsangprogramme from 1:00 p.m. which will conclude at 8:00 p.m. with a holy discourse by Satguru Mata Ji.

The Mission is running four hospitals and 133 dispensaries and nine pathological laboratories, all functioning on charitable basis. The hospitals are located in Delhi, Kolkata, Chennai and Agra, while dispensaries are spread across the country. The Mission also organizes camps for cataract surgery, health check-up, heart check-up, anemia control, etc. from time to time. The Mission contemplates to set up a full-fledged SantNirankari Health City in Delhi.It has one Blood Bank in Vile Parle in Mumbai.

The Mission is running two colleges and 19 schools in Delhi and other parts of the country. Besides, it has 54Tailoring and Embroidery Training Centres to help the widows and other needy women to stand on their own feet. The youth are also provided empowerment through various vocational courses like computer training and communication skills.

Since 2003, the volunteers of the Mission have been undertaking tree plantation and cleanliness drive across the country and abroad on 23rd February every year.From April 2010, social welfare activities are organized under the banner of SantNirankari Charitable Foundation