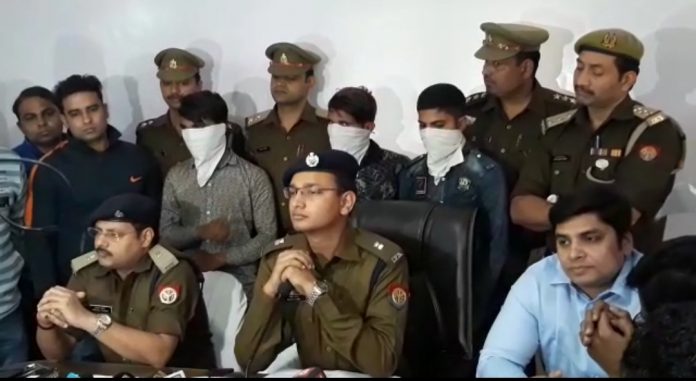 Ghaziabad: The Police have arrested three hardcore looters involved in two murders on Tuesday. They are arrested by Sihani Gate police. All of them used to shot the victims if anyone opposed the loot or snatching. The IG of Meerut Zone has declared fifty thousand rupees cash reward to police party that arrested the criminals, said Shlok Kumar, the SP city.

“The arrested are identified as Nadeem, resident of Khanna Nagar, Sameer and Suhel, the residents of Dawar Talab, Loni. One of their accomplice Azad and Sheru are absconding. The police have recovered a .32 bore pistol, a country made pistol, six snatched mobile phones and 360 rupees in cash.”added SP City.

The SP city told that the arrested have shot dead Manoj on November 9 in Kavinagar Industrial area when he was going with his sister by bike. The gang members had snatched mobile phone and purse from Manoj’s sister. Manoj had opposed the loot.

The arrested have also shot dead a Jim trainer when he opposed the mobile loot in Loni fifteen days ago.The gang members have also confessed a loot from a lady in Dasna a month ago. They had to flee discarding their bike on spot when the public had seized them. The police have claimed that the gang have been looted near about one thousand mobile phones and purses in NCR. Two of them have registered many criminal cases against them in various police stations on NCR, Delhi.