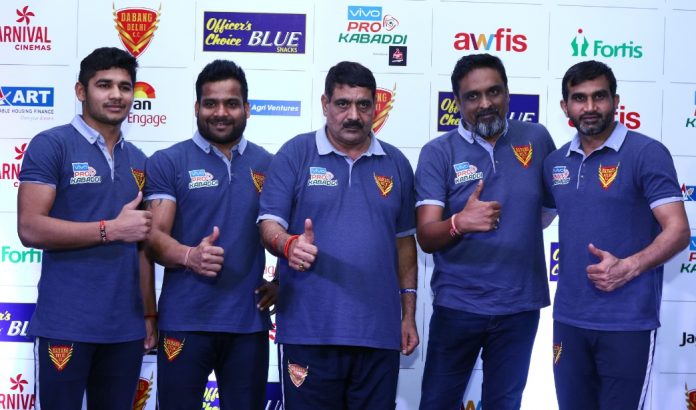 New Delhi: Dabang Delhi Kabaddi Club, the Delhi franchise owned by DO IT Sports Management, is all set to give its fans an enthralling experience as it gets ready for the home leg, from 30th November to 6th December, at the Thyagaraj Sports Complex. After all the anticipation, the fans will finally get the chance to see their team live in action at their home turf in what promises to be an exhilarating week.

The team is excited to finally play in front of its home crowd, and is counting on its fans for support! Talking about the home-leg Joginder Narwal, Captain of Dabang Delhi K.C. said, “The Delhi leg of the tournament is a homecoming of sorts for me. I am really looking forward to playing in front of the home crowd, and I count on their loyal support to help us deliver winning performances and many special moments to cheer about”

Talking about Dabang Delhi’s journey ahead of the home leg,Mr. Sumeet Yadav, Group CEO, DO IT (Sports, Retail & Family Entertainment) said, “This year Dabang Delhi has led the way in building Kabaddi as a sport, both among the masses and at the grassroots level. Our journey began in Dehradun where we hosted India’s Biggest Private-School Indoor Televised Tournament. We then took it a step further with Red Bull Tashan, India’s biggest inter-zonal private Kabaddi Tournament. Now, we’re here in Delhi to treat our home fans to some exciting action. We’re really looking forward to this phase of the tournament, as it’s a chance for us to show our appreciation to the loyalty our fans have always brought to the stadium.”

Fans making their way to support the team at the stadium also don’t have to sweat it out for tickets. With Paytm being the official ticketing partner of Dabang Delhi KC, fans can book their tickets using Paytm online and scan the Paytm QR Code placed at the venue. This will ensure a seamless experience as fans queue to watch one of the most popular Kabaddi clubs in the league.

Dabang Delhi KC is excited to give its fans an unforgettable experience in its own backyard, both on and off the mat!