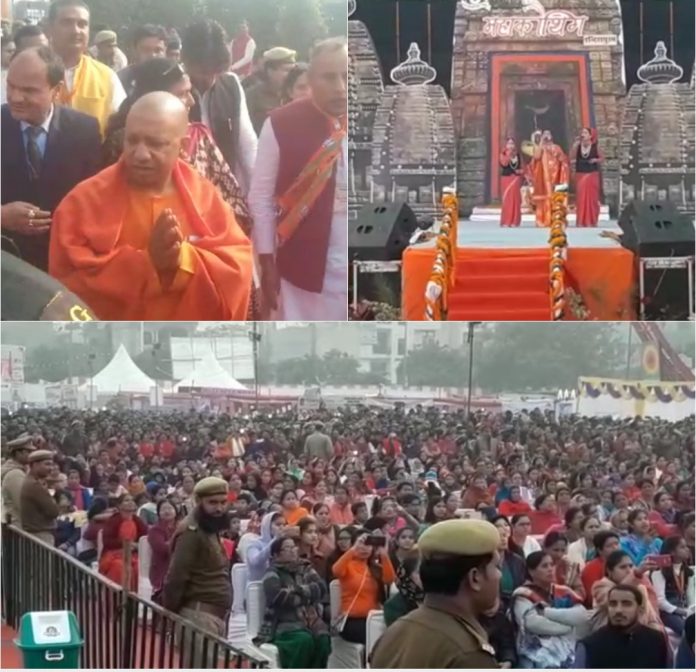 Deepak Pal | Camera Journalist
Ghaziabad:  UP CM Yogi Adityanath also participated in a cultural programme organised by a group of people from Uttarakhand who had organised a fair at Indirapuram named as “Mahakauthig Mela”.

In the the Mahakauthig Mela CM Yogi shown keen interest in it and closely watched cultural programmes, stalls and other attractions of people including cultural heritage, food and crafts exhibited there which were the main attractions of visitors. This “Mahakauthig Mela was organised from the people of Uttarakhand residing in Ghaziabad.

It is important to mention here that a good amount of people from Uttarakhand are settled in Ghaziabad and this programme of Mahakauthig Mela is a mirror of reflection Uttarakhandi ‘s rich cultural heritage and all aspects of Uttarakhandi’s rich cultural heritage has been shown in the fair though exhibition, projection, stalls and cultural programmes including singing and dance programmes organised here where people from all parts of India witness the activities from Uttarakhand and also enjoyed food, eateries and other handicrafts being sold. Since CM Yogi Adityanath is also from the Uttarakhand so his interests in the activities of Mahakauthig Fair is quite natural. He also addressed the congregation present in the occassion of Mahakauthig Fair to all and brief the schoenen of his government in the interests of the people of UP specially law and order, development projects. He appreciated the administration who have work hard for the betterment of the city in public interests.