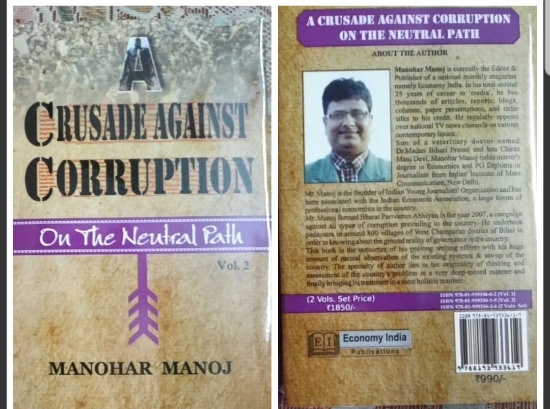 Yes of course! “A Crusade against corruption” has a strong possibility in India. This is the title of a book written by Mr. Manohar Manoj a senior journalist, who conducted massive research and applied his broad observation and his deep inside thoughts on this subject during last 15 years time period. After closely monitoring this issue in
various angles and almost all aspects of corruption; right from bottom to top, political to apolitical, administration to police, election to
voters, NGOs to the community and its aftereffects has come into this book comprises of 2 volumes and having around 800 pages fastened in
it. This book not only encompasses in it every aspect of corruption,
which gets started from numerous meaning and definitions of corruption
and then it brings all possible world history and then its prevalence in various forms of governments followed by various modalities to
check corruption.
This book is usually focused on India, so it has carried corruption from the very ancient period of the country to until now. This book
has compiled all the blown scandals and scams becoming headline news of media and views of common people respectively, right from the very
beginning not sparing even any minor highlights one can imagine. Apart from this, the book presents, reflects and highlights all forms
of structural corruption persisting in our country, in the day to day
circumstances, in various organs of democracy including Executive, Legislature, Judiciary and now much talked and the most important in the present life; the media and also being followed by various
ministries of governance. The book tells and highlights how corruption is precipitated in many sectors, institutions, and professions and
affecting the lives of we all Indians.
The author of the book titled “A Crusade against corruption” is Mr. Manohar Manoj, a senior journalist, a columnist, a blogger and also
frequently seen in electronic media on various issues of national interests as the subject matter expert. He is currently editor and publisher of a magazine, namely, ‘Economy India’ published in two languages from Delhi.
On asking how he generated the idea of authoring this book on such important issue like corruption affecting the progress of our country?
In reply to this, Mr. Manoj says he has spent almost 15-years time span on giving shape to this work and has touched almost all the dimensions of the problems of corruption faced by anyone. This book
has vehemently criticized the modalities of the prevention mechanism of corruption and its eradication undertaken by the Govt. of India and
other state authorities. This book also presents all the mass movements carried out in the past relating with public resentment against corruption. Apart from this, the book depicts various sorts of
public opinions and perspectives already made over the issue of corruption, which has been accomplished through his massive research
and surveys works carried out. Mr. Manoj has taken a holistic perspective in producing the comprehensive treatise on the subject
‘corruption’ through his book.

This book gives encyclopedic snapshots on the issues of corruption which impresses upon the people which India needs a huge churning of
thoughts towards the subject matters of corruption and also requires its solution to weed it out from the society and the same is also described in the above book intelligently. The solutions suggested the process to weed out corruption requires a complete moral overhauling, complete remaking of institutions, utmost use of technology, a mammoth
policy-driven system, and fully accountable governance. It has to go through all kinds of checks and balances with a high degree of
systemic precision. Author has successfully tried to touch every possible aspect of corruption thoroughly justifying his study initiative in this book besides suggesting some ornamental solutions
to the issue.
The author regards his book as an all-inclusive exercise on the topic of corruption, which contains a high degree of propensity, insights,
concerns, observations and a wholehearted honest commitment towards the issues of corruption and has succeeded in achieving his target.
Besides this, the author is objective and neutral at the same time, during raising his questions and doubts in form of issues in the book.