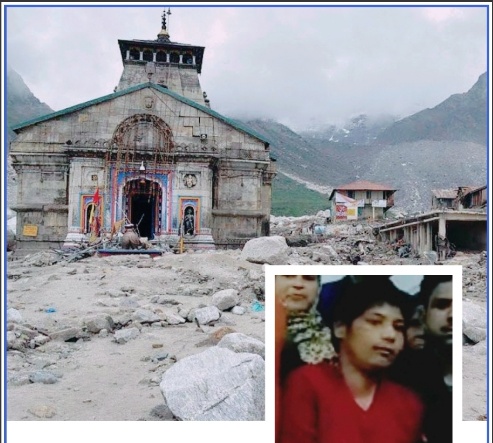 Aligarh : There is a proverb ” Jako Rakhe Saiyan Maar Sake Na Koy” the same very proverb is seeing to be true in a filmi style in which a teenager who had gone missing from Kedarnath temple in the year 2013 when a natural disaster taken place. The same very missing girl in real-life now met with her parents due to hard work carried out by many persons including NGOs who in real meaning connected the girl with her parents.

The reunion of missing girl with her family in Aligarh that too after five years, the parents of the girl had left their hope to see her daughter again but the proverb really became a reality for the family in a filmi manner.

The hope for the girl to come back or meeting her was over by her grand-parents for the teenager; Chanchal.  The grand parents of Chanchal; Harish Chand and Shakuntla Devi a  residents of Bannadevi locality of Aligarh, said, ” Jako Rakhe Saiyan Maar Sake Na Koi, it is looking like a filmi style and I am surprised to belief it. Really it seems to just a dream. Still I am surprised.  This reunion is nothing but a miracle of God. Only He can save any body.”

Chanchal had gone to Kedarnath alongwith her parents for pilgrimage where such tragedy occurred and more than 5000 persons reported to be either died or misplaced. Chanchal was also unlike those who misplaced and her father Rajesh also lost themselves. , However, Chanchal ‘s mother; Seema returned home at Ghaziabad after loosing hope of seeing husband and daughter. Everybody was under this impression after a long period of 5 years, Chanchal, then 12, was feared dead. But finally it was a surprise as noble work Ives results as well as respect and result too. Chanchal was handed over to one of an orphanage in Jammu, said the  Director; Gyanendra Mishra of NGO Childline Aligarh which helped in connecting the girl with her family and safely destined to her home. The hard work of the NGO paid and fruits were reaped in form of searching the family of Chanchal.

Any NGO who was running the orphanage was seriously searching the parents of Chanchal since then she had conveyed her parents name and  the place of city of her parents at Aligarh. They finally succeded and with the help of  observing that the girl often tried to communicate something about Aligarh city through her limited verbal skills.

Finally, somehow, the NGO get in touch with some reputed persons including BJP  MLA who asked many persons in Aligarh and the BJP MLA Sanjiv Raja who also keenly tried to help them out in their task with Mishra’s assistance. Mishra, in turn, managed to identify the family of the lost girl; Chanchal with the help of local police and could reach her home. Although
Chachal was unaware of the fact that she had also lost her father and now misses him a lot , after knowing it.