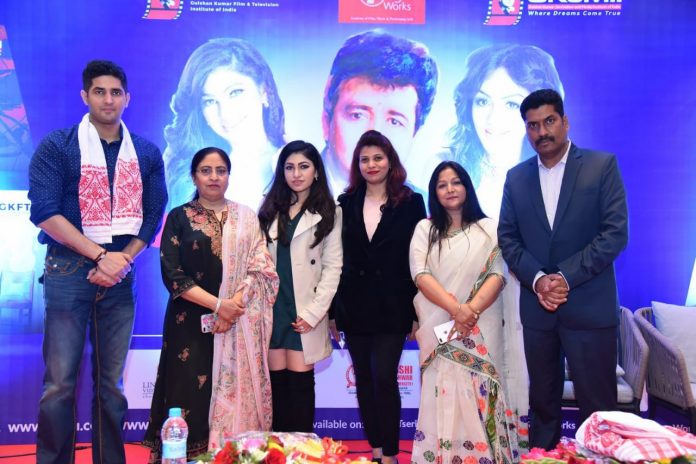 Guwahati: The T-Series Stageworks Academy is going to bring a new era for the students of North East India in the arena of performing arts. The T-Series Stage Works Academy, the most premium institution in the field of media education, today announced its arrival in North East to explore, train and groom young & budding talents in the field of singing, acting, dance, modeling, instrumental music & still photography, besides few job oriented technical courses in the field of Film & television Production under the banner of Gulshan Kumar Film and Television Institute of India.

The Guwahati center of T-Series Stageworks Academy is spread in 15000 sqft. the area at 5th Floor of Guwahati Central, Zoo Road. T-Series, India’s number one Music Label and Production House has forayed itself into the educational wing with T-Series Stage Works Academy (TSA). The academy has already made a mark and earned praises from all quarters under the leadership of Director T-Series Mrs. Sudesh Dua, Singer/Director Ms. Tulsi Kumar, and Director T-Series StageWorks Mr. Hitesh Ralhan. Besides performing arts academy, various technical courses in the field of Film & Television production, Journalism & mass communication, Fashion & textiles design etc. are also running in the main campus located at Noida.

Resonating in the same frequency the Dream House Productions is a known name in the music & entertainment production industry of North East under the leadership of young and dynamic director Mrs. Nita Sharma. Singer/Director Tulsi Kumar complemented the Dream House Productions and appreciated the infrastructure and facilities which are going to be made available to the students of North East which is quintessential for the pursuance of their hidden talent. She also promised relevant exposure to meritoriously talented students of the North East.

He added, “Guwahati center of the TSA will cater to the increasing demands of Northeastern students in the sector of media and performing arts and will function very well under the benchmarked and qualified faculties with state of the art infrastructure.”

He also blessed Mrs. Nita Sharma for extending his support to fulfill this noble initiative. The Guwahati Centre of T-Series Stage Works Academy which is designed and fully equipped with the modern facilities is to kick-start registration for admission in its courses in singing, acting, dance, modeling, and instrumental music & still photography with immediate effect.

Commenting on this occasion, Mrs. Nita Sharma, Director, Dream House Productions said, “We are setting up modern well-equipped infrastructure supported by benchmarked trained faculties from the music and film industry in order to nurture the upcoming fresh and raw North East talent in Films & TV and performing arts.”