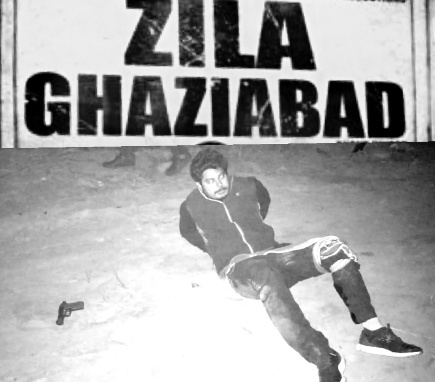 Ghaziabad: UP Special Task Forces nabbed a dreaded Criminal of Yogesh Bhdoda Gang against whom many case are pending after exchange of fire reported by Saket Dinkar | News Editor

In Ghaziabad a second shootout incident reported within 24 hours where a crook got injured and nabbed by police. In this retaliation firing policemen also injured.STF SSP Abhishek Singh had confirmed inputs that some crooks are in Ghaziabad at Loni area’s and going to ecommit crime.The STF team came into action and started an operation with Loni police and surrounded the entire locality. The hard core criminals when they found themselves surrounded by police they opened fire. Police also used cross firing in which  Rewardee criminal of Bulandshahr received a bullet.

STF trying to arrest them but they started firing on the police in which 2 STF constables Bhupendra and Deepak got injured. They immediately rushed to the hospital for treatment. The STF replied back with bullets in self defence and a  crook received bullet in his leg and arrested by the STF force and he was also admitted to the hospital for treatment.
Arrested accused identified as Sourav son of Devendra resident of Bulandshahar. He was carrying a reward of 25000.
He is a member of famous Yogesh Bhdoda gang who were very famous in NCRs areas.

According to Abhishek Singh, SSP STF, “we had certain inputs about some criminals are hidden in Ghaziabad in Loni area.  The STF team surrounded the area. Mean while when the criminals found that they are surrounded by police force they started firing on police personnel. In self defence police also used cross firing in which one of the criminal was wounded. After enquiring it was found that he was a dreaded Criminal and was wanted. There was a reward was announced on his head. “