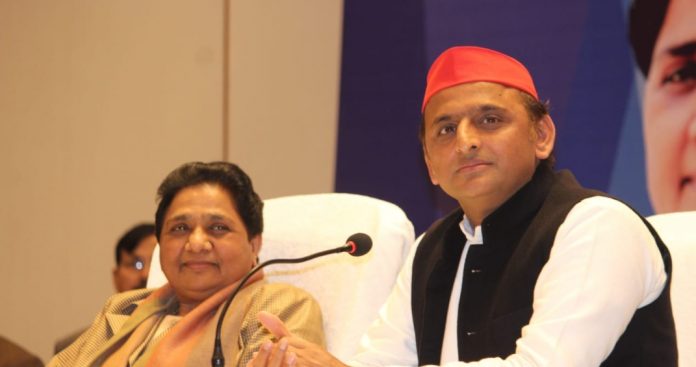 Lucknow: Pausing all speculation, Mayawati and Akhilesh announced to contest the upcoming Lok Sabha elections on the 50-50 formula. There has been a coalition of BSP and SP in Uttar Pradesh for the general elections to be held in 2019. Both the parties have formed a strong alliance opting for a 50:50 distribution of Uttar Pradesh’s 80 Lok Sabha seats for 2019 elections, but transferring of traditional votes to each other won’t be that easy. SP leader Akhilesh Yadav and BSP supremo Mayawati held a Joint Press in Lucknow and endorsed their coalition.

Mayawati said that the Congress had failed to transfer its votes to BSP candidates. Similarly, her experiments in government formation in an alliance with the BJP ended in strife and stress. According to sources in the SP and the BSP, Akhilesh and Mayawati may address a few rallies together in different parts of the state. In 1993, BSP founder Kanshi Ram and SP patriarch Mulayam Singh addressed a couple of meetings together but later decided to hold independent shows.